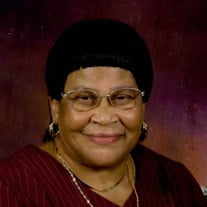 You can show your support by sending flowers directly to the family by contacting Debbie's Flowers (870) 633-2225, or by visiting www.etsy.com/shop/ShopYABAS Mrs. Willie Mae Cook Moore was born February 28, 1938, in Forrest City, Arkansas. Her parents were the late Jessie and Lavada Cook. The youngest of three children, she had an older brother Casey Coleman and a sister, Aretha Cook Tobar. Mrs. Moore confessed a hope in Christ at an early age at the Mt. Vernon M. B. Church and later joined the Salem M. B. Church where she remained a faithful and dedicated servant of God and her church for more than 40 years. At Salem, she served in various capacities, helping where she was needed and joyfully lending a hand to anyone who asked. “Ms. Willie Mae” as she was known to her Salem Church Family, served faithfully in the Ushers Ministry under the leadership of Brother Charles Lesure and stepped up to lead the ministry until her health made that impossible. Each Sunday, she would arrive at church on time, and take her post serving her Lord by serving others. She loved Salem, the Ushers Ministry, and her pastor and they loved her, too. In December 2001, she was honored by her church family for her faithful, loyal, dedicated service. Mrs. Willie Mae Cook Moore began her education at the Mt. Vernon School and later attended Lincoln Sr. High. For 37 years, she was the loving wife of Mr. Eugene Moore Sr. They were committed to each other and were blessed with a beautiful family. She fulfilled the vows she had pledged before God to her husband, who passed away in 1997. Mrs. Moore, not one to be idle, she worked diligently for the Forrest City School District Child Nutrition Department. She worked at Central Elementary School for 32 years and was recognized by the school and the School District for her service. Then Mayor Larry S. Bryant issued a proclamation naming May 29, 2002 “Willie Mae Moore Day in honor of her unselfish, tireless service to the children of our school district. She returned to substitute in the cafeteria at the Forrest City Junior High School two years after retiring. While serving in this capacity, she witnessed firsthand the importance of and need for a quality education. After retiring, Mrs. Moore provided a safe, nurturing environment for three wonderful children: Reese, Gavin and Addison Murphy. They called her “Mae Mae”. They treasured her time with them, and she has remained a part of their lives. Mrs. Willie Mae Moore, served on the Housing Authority Housing Board of Commissioners from October 2000 until March 2020 and was recognized for her 20 years of service. She maintained a close relationship with her siblings. Her sister, Aretha often spoke of how protective she was of her baby sister. Mrs. Willie Mae loved her grandchildren. The grandchildren, who lived out of town, would often spend summers with her and grand and great- grandchildren, who live close by, would stay with her nightly. On January 20, 2022, with her family by her side, Mrs. Willie Mae Moore made her transition from this temporal life at Crestpark Nursing Retirement Inn and Rehab in Forrest City, AR to her eternal life with God. The golden gates opened, and He called to her “Come” and her family bid her farewell. Mrs. Moore was preceded in death by her parents, her siblings and her husband. She leaves to cherish her memory: three (3) daughters, Diane (Percy) Thomas, Peoria, IL; Emma (Paul) Wright and Debra Moore of Forrest City, AR; three (3) sons, Charles Cook and Frank Moore of Peoria, IL; Eugene (Jeanette) Moore of Forrest City, AR; nine (9) grandchildren, Lashawn Cook Hester, Alicia Cook Russell, DA Wanda Cook, Rashea Thomas, Jerald Thomas, Dominic Moore, Detrick Moore, Andrew Wright, and Aaron Wright; 3 great-grandchildren, Aniya Reyes, Austin Russell and Zavian Wright; (2) devoted sisters in law, Dorothy Anderson and Louise Moore both of Forrest City, AR; longtime and close dear friend, Teresa Rogers; a devoted niece, Jackie White, a host of other family members, her church family and friends.

You can show your support by sending flowers directly to the family by contacting Debbie's Flowers (870) 633-2225, or by visiting www.etsy.com/shop/ShopYABAS Mrs. Willie Mae Cook Moore was born February 28, 1938, in Forrest City, Arkansas.... View Obituary & Service Information

The family of Mrs. Willie Mae Moore created this Life Tributes page to make it easy to share your memories.