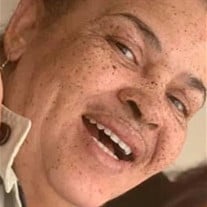 Willie Elaine Mooney passed peacefully on Tuesday, the 20th of April 2021, Northwest Medical Center – Springdale surrounded by her family. She was 55 years of age. Willie Elaine Mooney, she was born in Forrest City, Arkansas on September 30, 1965, to William and Extra (Boyd) Mooney. She was educated in the Forrest City School District and graduated in 1984. She furthered her education at Philander Smith College and received additional education in physical therapy and as a physician assistant. She was employed by Whitehaven Community Living Center in Memphis, TN until her health failed. She resided in Forrest City and was cared for by her niece, LaQuisha and recently moved to Springdale with her nieces, Nicole Johnson, NaKasha McKnight, and Ceddrekial Tucker who cared for her until her demise. She was as beautiful on the inside as the outside. Her family was her greatest joy, and she was a loving and caring for those around her. Her selfless support, kind approach, gracious manner, courageous heart and adventurous spirit influenced her family in so many ways. She had a large circle of friends whom she loved dearly and treated with unwavering loyalty. Her faith was steadfast. A lifelong active member of Mount Calvary Missionary Baptist Church in Forrest City under the leadership of Reverend Michael McGruder. She served on the usher board. She loved the teaching and training under Bishop C.L. Moore of the Greater Mount Moriah Missionary Baptist Church. She was preceded in death by her parents, William Mooney and Extra Boyd Mooney; sisters, Barbara, Diane, Datharene, and Dorothy; brother Willie C. and James David. She is survived by his siblings; William Mooney, Bob Mooney (Carolyn), Melvin Mooney (Barbara), Edward Mooney (Sopiah), Doris Cochran (George), Regina Johnson, Rena Humphrey (James), Sarah Fryer (Theartice), Zelma Miller (Gary), Evelyn Washington (Charles), Frankie Webber (David); special nephew, Taurus Cochran; three special nieces, Stephanie Coates, Chiquita Mooney, Renita Johnson, and LaQuisha Mooney; nieces, nephews, other relatives, and friends.

Willie Elaine Mooney passed peacefully on Tuesday, the 20th of April 2021, Northwest Medical Center &#8211; Springdale surrounded by her family. She was 55 years of age. Willie Elaine Mooney, she was born in Forrest City, Arkansas on September... View Obituary & Service Information

The family of Ms. Willie Elaine Mooney created this Life Tributes page to make it easy to share your memories.

Willie Elaine Mooney passed peacefully on Tuesday, the 20th of...