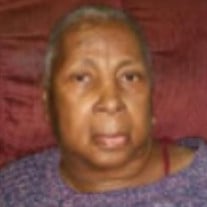 You can show your support by sending flowers directly to the family by contacting Debbie's Flowers 870.633.2225 Mother Willie Mae Buford was born January 16, 1934 to Mr. Clarence Powell and Ms. Ominion Johnson who preceded her in death.&#8203; Mother... View Obituary & Service Information

The family of Mrs. Willie Mae Buford created this Life Tributes page to make it easy to share your memories.