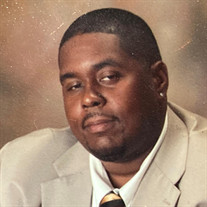 You can show your support by sending flowers directly to the family by contacting Debbie's Flowers 870.633.2225 Tyrone Tinner, affectionately known as “Scooter” as a young boy and “Big T” when he became a man, entered into the world October 1, 1973 in Forrest City, Arkansas. He was born to Mildred and James Tinner. He was full of laughter, joy, and kindness throughout his life. He was preceded in death by a sister—Renae Townsend. He confessed a hope in Christ at an early age. He actively participated in community programs. He later joined Temple of Deliverance and remained a faithful member until his departure. As a child, he loved to make everyone laugh and always kept a song in his heart. Two of his favorite genres were the Blues and Gospel music. One of his favorite Gospel songs was “Jesus Will Fix It’ by the Williams Brothers. Tyrone Tinner peacefully transitioned from his earthly home to his heavenly home on February 21, 2012 with family members present. He was spiritual and had a love for Christ. He took every opportunity to honor God for all his achievements. His love, passion, and service will always be remembered. He loved being a Free Mason as well as a “Master Griller”. Every holiday he would pull out the BBQ grill. Some of his favorite foods included well-seasoned dry ribs, drunken chicken, and smoke links, and he loved for you to sample. He won third place in a BBQ contest. Tyrone Tinner also had a love of fashion. “Mr. GQ” was what some called him. He graduated from Forrest City High School in 1992 and was involved in various activities and organizations. He loved to hunt, fish, travel, and listen to music as well as meeting new people and spending time with family and friends. His favorite football team was the New Orleans Saints. After high school he worked for Truck Stops of America for a few years before landing a career with Hershey’s. He leaves to cherish his memories his wonderful mother—Mildred Taylor of Forrest City; aunt – Emma Taylor of Forrest City; uncles—Lawrence Moore and James (Pearlene) Taylor; sisters—Shunta Taylor, Vern Allen of Forrest City, Diane Towner of Little Rock, Faye Hicks of Alabama, Marilyn (Freddie) Adams of Virginia, and Vickie Millbrooks of Forrest City; brothers—Calvin Taylor of Georgia, Pat (Willie Mae) Towner of Forrest City, James (Angela) Towner of Forrest City; and a host of cousins and friends.

The family of Mr. Tyrone Tinner created this Life Tributes page to make it easy to share your memories.