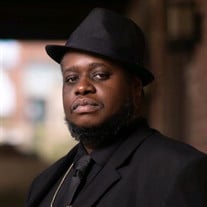 You can show your support by sending flowers directly to the family by contacting Eva's Little Flower Shop (870) 238-9264, or by visiting www.etsy.com/shop/ShopYABAS' Tyler Tyrone Coleman was born on July 4th, 1984, in Marianna Arkansas to parents Roy Lee Sr. and Joyce Coleman. He was the youngest of 3 children and the missing piece to their family puzzle. A cherub faced baby boy full of love, joy, and light. He carried those traits throughout his entire life. Tyler attended school in Marianna and graduated Lee Sr. High in 2002. He later relocated to Jonesboro, AR for employment opportunities. He spent a number of years as a highly respected superintendent in the manufacturing field. In 2005, he met a young lady named Renisha and fell deeply in love. He claimed her as his Queen. In 2007, they became the proud parents to Princess Tyianna, and the greatest daddy/daughter duo in the world was formed. He was a fully devoted girl dad. Tyler and Renisha wed in October of 2008. Throughout 13 years of marriage, they built a life together and shared a once in a lifetime love. During his youth, Tyler was baptized by Pastor O.B Brown at the Union M.B Church. In 2016 he joined the Good Shepherd M.B Church under the leadership of his father Pastor Roy Coleman. There he served in whatever capacity was needed. Tyler was a special person. An exceptional, wonderful man with a beautiful spirit. A true angel on earth. He left a lasting impact on everyone that he encountered. He cherished his family and friends and showered them with an abundance of love. He was compassionate, kind, and selfless. He was willing to help anyone he cared for, and he was an absolute joy to be around. You were guaranteed a laugh while in his presence. Affectionately known as Bizkit, he was the "big" little brother and the fun uncle. Tyler enjoyed traveling, grilling, and video gaming. He was a collector and artist. He was a man of integrity, a provider, and most importantly, a present husband and father. Tyler is preceded in death by his maternal grandparents, George and Fannie Mae Hall, paternal grandparents Albert and Essie B. Coleman, and also nephew Ro'Dre Mitchell. He leaves behind a devastated and heartbroken family. Wife Renisha, daughter Tyianna, parents Roy Sr. and Joyce Coleman, brothers Roy Jr. (Gwen) and Christopher Sr. (his best friend and partner in mischief), mother in-law Patricia, sister-in-law Sharisha, brother in-law Marqual, nieces Breanna, Alexandria, Jessica, Kylie, and Amora, nephews Christopher Jr, Maysen, Ashton, Au'Bron, Kaiyel, Corell Jr, and Kobe, special cousin, Charles "Chuck" Grandberry (his bonus brother). As well as a host of aunts, uncles, cousins, in-laws, extended family, friends, co-workers, and associates. This great man was a light that dimmed too soon and he will be missed dearly. Tyler's legacy and memory will live on forever in the lives he has touched.

You can show your support by sending flowers directly to the family by contacting Eva's Little Flower Shop (870) 238-9264, or by visiting www.etsy.com/shop/ShopYABAS' Tyler Tyrone Coleman was born on July 4th, 1984, in Marianna Arkansas to... View Obituary & Service Information

The family of Mr. Tyler Tyrone Coleman created this Life Tributes page to make it easy to share your memories.