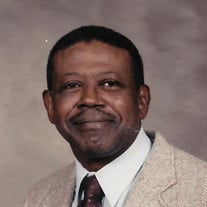 You can show your support by sending flowers directly to the family by contacting Debbie's Flowers (870) 633-2225 or ROYAL DESIGN FLOWERS (870) 735-2000, or by visiting www.etsy.com/shop/ShopYABAS Troy Lee Smith born April 28, 1926, in Griggs (Widener), Arkansas, to Joseph Smith and, Annie Mae Sanders who preceded him in death. He was preceded in death by his brother, Glen; from a Joseph Smith previous marriage he had siblings, James A. and Josephine who preceded him in death. At an early age, Troy confessed Christ and joined Riverside Baptist Church, Widener, Arkansas. When he moved to Forrest City, he joined Salem Baptist Church where he remained a faithful member until his illness. Troy attended Lincoln High School and was a farmer for 17 years. When he moved to Forrest he began working at Warwick and then Eaton until he retired. Prior to retiring he became caregiver to his parent as well as several aunts, uncle, brother-in-law, and cousins until their death. He spent his life helping others until he became disable in 2018 and could no longer. He was fondly known throughout Forrest City throughout many generations as simply “Mr. Troy.” In 1947 he was joined in holy matrimony to Pearlene Jones who preced-ed him in death and to that union they had nine children, Mary (Forrest City), Sidney (deceased), Troy, Jr. (deceased), Eugene (Forrest City), Walter (Ann) Lithonia, GA; Carolyn Ann (North Little Rock), Joseph Ronald (deceased), Larry (Forrest City), Michael David (deceased). Troy has another son prior to his marriage, Bobby Gregory (deceased). Troy is the proud grandfather of 26 grandchildren, 37 great grandchildren, eight great-great grandchildren, and a host of nieces, nephews, and cousins.

The family of Mr. Troy Lee Smith created this Life Tributes page to make it easy to share your memories.