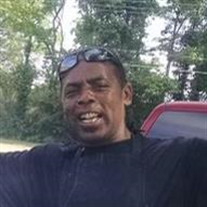 You can show your support by sending flowers directly to the family by contacting Eva's Little Flower Shop (870) 238-9264, or by visiting www.etsy.com/shop/ShopYABAS Terry was born July 22, 1964, in Forrest City, Arkansas to Aaron “BB” & Beatrice Williams. Later in his young life, with his parent’s consent, Terry went to live with his oldest sister, Florine and his brother-in-law Gene Ray Jackson. They loved, nurtured, and cared for him as their own. He has a very special niece, Lashonda Jackson Dean, whom he loved as a sister. At an early age he accepted Jesus Christ as his personal Savior and joined Saints Temple COGIC. Terry attended the Forrest City School District and graduated from the FCHS Class of 1983. Terry was a hard worker and was employed at places such as: The City of Forrest City, Family Dollar Distribution, Palestine Sanitation Department, and Forrest City Grocery. Terry was a loving person, who was adored by so many. He loved people and never met a stranger. Terry had a beautiful smile and a heart made of gold. He had love for everyone and everywhere he went, he touched the hearts of many. Terry was a very good father and loved his children and family dearly. He would go out his way to do anything for anyone and was always just a telephone call away. As a child and adult Terry loved animals: dogs, racoons, rabbits, etc. He loved to hunt, barbeque, and fellowship with friends and family. It was nothing for him to barbecue and invite EVERYONE over. He was the “Barbecue King” and was the Master of barbecue pig tails, and everyone knew it. Terry was called to eternal rest on Wednesday, March 16, 2022 at Forrest City Medical Center. He is preceded in death by his parents, Aaron “B.B.” & Beatrice Williams; grandparents, Walter & Katie Mays, James & Lucy Ann Williams; one sister, Priscilla Graham; a special brother-in-law, Gene Ray Jackson; four children, Kali Williams, Kerria Williams, Michael Williams, and Deontre Coulter. He leaves to cherish his memories seven daughters, Marquita Williams, Terri James, Whitney Warrior, LaTonya Halliburton, Alexis Hamilton, Terrianna Williams, and Mariaha Williams; seven sons, Marcus Williams, Cordero Riley, Terry Williams, Jr., Terrance Williams, Joel Hamilton, Vonterrious Williams, and Terrion Williams; eighteen grandchildren, Keniya Williams, Teryan Williams, Namia Williams, Marcus Williams Jr., Keion Collins, Kendal Warrior, Takirah Peacock, Sariyah Coulter, Deontre Coulter, Jr., Skylar Coulter, Karter Coulter, Marquise Riley, Cordero Riley, Jr., Cordaja Riley, Cordarius Riley, Cordarion Riley, Cortavia Riley, Jacarri Riley; seven sisters, Florine (James) House, Gloria Dean Jones, Lucy (Hubert) Farris, Bessie “Linda” Bradley, Doreen Anderson, Barbara (Mosquada) Walls and Marice McGhee; two brothers; Aaron Williams and Lonnie Williams; a special niece, Lashonda Jackson Dean; one special aunt, Corine Williams; one special uncle, Ocie Williams; and a host of nieces, nephews, cousins, and friends. Terry also had non-biological children for whom he loved and cared for deeply. The love we have for Terry runs deep. There’s a BIG void in our life that cannot be replaced. He will be missed tremendously. Terry, we love you, but God loves you best. Take your rest. You fought a good fight, you have finished your course, and you kept the faith. Thank God Almighty he’s free at last.

The family of Mr. Terry Williams created this Life Tributes page to make it easy to share your memories.