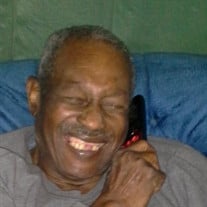 Sylvester “Bo” Green was born to the late Leophis Sr. and Ester Green in Aubrey, Arkansas on June 4, 1936. He was the first of thirteen children born to the family. Sylvester had a devoted grandfather—Nathaniel Green (Eubie) and Aunt Lillian Meredith who were contributory to his upbringing. Two children—Sylvester Green, Jr., Garry Broadway and six siblings—Cora, Queen Ester, Betty, Zetta, Rev. Joseph Nathan, and Reverend Leophis Green are now immortalized. He confessed a hope in Christ at an early age at Mt. Gillian Missionary Bap- tist Church in Marianna, Arkansas, where he faithfully served as Trustee, President of the Usher Board, and was an active member of the Usher Fed- eration. He attended Robert R. Moton High School and was a dedicated welding tech- nician for forty-five years at Douglas and Lomason (D&L) both in Marianna, Arkansas. He was also a Mason at PHA Affiliated Medarian Lodge #32 in Pal- estine, Arkansas. “Bo”, as most knew him, had a blessed union of fifty-nine years to the late Ms. Irma Lee McKenzie. They were married in 1957. On Wednesday, Janu- ary 8, 2020 at Crossridge Community Hospital in Wynne, Arkansas, he was called home to rest and stepped from mortality into eternity. Cherishing his memories are two brothers—Isaac Green (Virgil) of Moro, Arkansas and Larry Green of Little Rock, Arkansas; four sisters—Luebirdia Anderson of Memphis, Tennessee, Bobbie Dukes of Dallas, Texas, Theressa Green of Forrest City, Arkansas, and Brenda Beasley of Hubert, North Carolina; two sisters-in- law—Gloria Green of Little Rock, Arkansas, and Bobbie Green of Palestine, Arkansas; one daughter-in-law—Barbara Broadway of White Haven, Tennessee; and a host of grandchildren, in-laws, nieces, nephews, cousins, and friends. Funeral Service for Sylvester Green, 83 of Marianna will be Saturday (01/18) at 12 noon at the Mt Gillian Baptist Church, Holub Crossing with Reverend Theodore “Ted” Austin delivering the eulogy. Burial will follow at Gill Cemetery. Visitation will be one hour prior to the service. Miles J. Kimble Mortuary & Cremation which is in charge of arrangements.

Sylvester &#8220;Bo&#8221; Green was born to the late Leophis Sr. and Ester Green in Aubrey, Arkansas on June 4, 1936. He was the first of thirteen children born to the family. Sylvester had a devoted grandfather&#8212;Nathaniel Green (Eubie)... View Obituary & Service Information

The family of Mr. Sylvester Green created this Life Tributes page to make it easy to share your memories.

Sylvester “Bo” Green was born to the late Leophis Sr. and Ester...