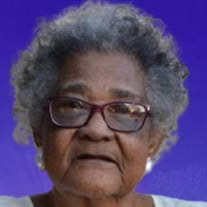 You can show your support by sending flowers directly to the family by contacting Debbie's Flowers 870.633.2225 Stella Mae “Stat/Stell” Sain was born December 7, 1934 in Marianna, Arkansas to Augusta and Estella Sain. Stella was the youngest of seven children born to this union. Stella was later reared in Forrest City, Arkansas, where she resided until her death. At the tender age of 15, Stella met Jessie “June” Driver. At age 18, Stella married Jessie on March 10, 1953. Stella and Jessie were married 67 years. To this union was born eight children. Jessie also had three other children; making a total of eleven children who they both loved very much. Family was very important to Stella. With the desire to financially contribute, Stella went to work in private homes as a domestic worker and baby-sitter for various families. At the request of her husband, Stella left domestic work and returned home to manage their finances and the upbringing of their children. In 1967, Stella was baptized in Jesus’ name at Christ Temple Pentecostal Church under the late Pastor Elder Dave Favors. She was won to the Lord with the help of her mother and Elder A.J. Kimball. Stella worked in God’s vineyard for 53 years. Stella was a servant of the Lord as: a church mother, choir president, Sunday school teacher, kitchen supervisor, and various other services. As an avid Bible Scholar, Stella continuously nurtured her relationship with the Lord. Because of her close walk with the Lord, her family and many others were drawn into faith. Stella’s favorite scripture is Psalm 139: 23-24: Search me, O God, and know my heart: try me, and know my thoughts: and see if there may be any wicked way in me, and lead me in the way everlasting. Her theme song in life is “Somehow I Made It”. Her favorite sayings are “Don’t stop me! Let me do it, ‘til I can’t do it no more,” and, “Who wouldn’t serve a GOD like this?” Stella finished strong because of her unwavering faith. God promised to be with her through every step she took in her journey. God showed himself strong on Stella’s behalf. Falling in love with Jesus was the best thing Stella had ever done. Stella is loved by all her children, is the apple of her grandchildren’s eyes, and is “gran-gran” to her great grandchildren. She was admired by many other families and friends. Stella was a strong black woman of faith. God was her all and all. To God be the Glory for all that He has done. Stella was preceded in death by her husband, Jessie Driver; mother and father: Augusta and Estella Sain; brothers: Aubrey Lee Sain, Augusta Sain Jr., John Ollie Sain, Benjamin Sain, Lloyd Sain Sr.; her sister Theresa Sain Carruth; and daughter, Dianne Driver Bland. She leaves to cherish her memories: 2 sons and 8 daughters: Louis Driver and Janet Driver of Forrest City, Carolyn Robinson of Little Rock, Gloria Driver of Palestine, Gary (Sebastian) Driver of San Diego, Linda Driver of Forrest City, Yvonne Driver Tomlin of Palestine, Donna Driver and Deborah (Tony) Huntley of Palestine, and Karen Driver Fletcher of West Memphis; her brother of love, Joe (Ethel) Driver of Forrest City; her daughter of love, Margaret Mathews; 22 grandchildren, 44 great grandchildren; 7 great-great grandchildren; and a host of nieces, nephews, cousins, and friends. Stella Mae Driver will be missed dearly by all who knew her.

You can show your support by sending flowers directly to the family by contacting Debbie's Flowers 870.633.2225 Stella Mae &#8220;Stat/Stell&#8221; Sain was born December 7, 1934 in Marianna, Arkansas to Augusta and Estella Sain. Stella was... View Obituary & Service Information

The family of Mother Stella Mae Sain Driver created this Life Tributes page to make it easy to share your memories.