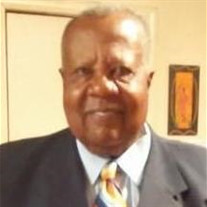 Rufus Duff Jr was born on April 14, 1938 in Round Pond, Arkansas. He was the oldest of eight children born to the late Rufus and Odell Moore Duff. His siblings were Carl Lee, Robert T., Dollie, Lennell, Lillie, Abron and Gloria. He united in marriage to Miss Bernice Barden on March 3, 1958 and to this union eleven children were born: Carolyn, Barry, Lonnie, Jeanelle, Julius, Jackie, Donna, Martin, Angela, Rufus, and Ronnie. They made their home in Forrest City, Arkansas. Brother Rufus Duff Jr was a farmer by profession. He loved raising a garden especially, sweet potatoes and watermelons. His beloved, “Bern” passed away on December 16, 1987. Before his passing, three of his children joined their mother, Julius, Martin and Angela Faye Duff. Needing a wife and helpmeet the Lord sent to him, Mrs. Lucille Coleman and they were joined in holy matrimony on September 26, 2005. They remained faithful to their vows until the Lord God called him home. In addition to being a dedicated husband and loving father, he was committed to the call of Christ and became a faithful member of the Salem Missionary Baptist Church in May of 1976. He was a member of the Sunday School, Deacons Ministry, and the Voices of Thunder. Each Sunday, he could be found on the first pew, Bible in hand, witnessing to the Word praising and praying to God. He was a dependable, dedicated member, who was never full of excuses or finding fault with others. He would often be found extending a prayer, during devotion, calling on his “Heavenly, Father” and saying “mercy is my prayer.” His word was his bond. Brother Duff was a patient God-fearing man, who believed in hard work and helping others. He and his wife, Lucille, raised his grandsons, Tyler and Justin. They brought them to church every week and instilled Christian values in both of them. Brother Rufus Duff Jr. heeded the call of the Master and transitioned from this earthly life to his heavenly reward on April 13, 2020. Brother Duff leaves to cherish his life and memories: his loving wife, Mrs. Lucille Duff; his children, Carolyn Bean, Barry Duff, Lonnie Duff, Jeanelle Duff, Jacquelyn (Ronnie) Lewis, Donna (Michael) Byrd, Rufus (Denise) Duff, and Ronnie (Marquita) Duff; his grandsons, Tyler (Shaquitta) and Justin Duff, seventeen other grandchildren; nine great-grandchildren; his siblings: Dollie Hicks, Lonell Duff, Lillie Brown, Abron (Deloris) Duff and Gloria Clayton; seven step-children, a host of nephews, nieces, other relatives, friends and the Salem Church Family.

Rufus Duff Jr was born on April 14, 1938 in Round Pond, Arkansas. He was the oldest of eight children born to the late Rufus and Odell Moore Duff. His siblings were Carl Lee, Robert T., Dollie, Lennell, Lillie, Abron and Gloria. He united... View Obituary & Service Information

The family of Deacon Rufus Duff Jr. created this Life Tributes page to make it easy to share your memories.