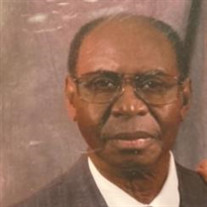 You can show your support by sending flowers directly to the family by contacting Debbie's Flowers 870.633.2225 or by visiting www.etsy.com/shop/ShopYABAS Roosevelt Johnson was born on July 14, 1926 to the late Walter and Lee Berter Johnson in Hughes, Arkansas. He was the third child of five children. Early childhood days were spent in Round Pond and Madison, AR, and during these years he accepted Christ as his Lord and Savior and joined Madison Light M. B. Church. He loved to talk about his early days and how he and his siblings enjoyed their life growing up and often boasted about driving at the age of fourteen. He was also known for his skills in baseball and could throw a curve ball no one could hit. His love for baseball was always a part of his life and he loved the Detroit Tigers and in later years developed a fondness for the Texas Rangers. He attended Lincoln High School in Forrest City but decided to leave and go north seeking a better life. He began work but was soon to answer the call and join the United States Army in 1946. While in the Army he was a heavy equipment operator and expert rifleman stationed in Guam with the 93rd Engineering Construction Brigade and received the WWII Victory Metal. After his honorable discharge from the Army he returned to Detroit and began working for the city of Detroit. Seeing that opportunities were better "up north", he convinced his father and mother to join him and after working together they soon purchased a home where family and friends would gather for over forty years. Being a man of faith, he and his parents united with Ephesian Missionary Baptist Church. During this time he also became a Mason from the Prince Hall jurisdiction of Michigan and shared that he obtained 33 degrees. In 1961, he married the love of his life, Bernice Richardson and they shared fifty-four beautiful years together. They loved to go to church on Sunday's, where he served as a Trustee, travel in their camper, entertain family and friends and many other adventurous endeavors. After attending many family reunions of family and friends in Michigan, he had a desire to start a Johnson Family Reunion. He contacted cousins in the Detroit area and told them of his vision and they began to meet and organized what would be "The Johnson and Related Families" Reunion Committee. The first reunion became a reality in 1976 and held strong for over twenty years. Family members traveled to 8 states and Canada over the years because of his vision. He retired from the City of Detroit in 1987 and returned to Arkansas, and fulfilled his desire to own a farm and he and his wife, with the help of his niece, Wilma built a beautiful home on his own land. While he had owned several homes and rent houses in Detroit this was a dream fulfilled in honor of his parents. Also after returning to Arkansas, he and his wife united with the Pilgrim Missionary Baptist Church under the leadership of the late Elder S. L. George. He was an active and devoted member, trustee, and deacon and served faithfully until his health failed. He was also active in the Maroon and Gold National Alumni Association, Inc. for Lincoln High School graduates, and taught AARP drivers education class for seniors in Marianna for several years. Family members waiting to greet him on the other side: Wife: Bernice Richardson Johnson, Parents: Walter and Lee Berter Johnson, Daughter: Deanna Brayboy Oliver, Siblings: Walter Louis Johnson, Deseire Thompson & Velma Currie, Niece: Patricia Johnson Walker, Nephew: Caleb Currie and a host of cousins. Left to celebrate and cherish his memory: Two sons: Nathaniel (Vickie) Green Johnson, Marianna, AR and Dewayne (Pamela) Brown, Saginaw, MI; one sister, Bernice Johnson Motley; special granddaughter: Vanessa (Anthony) Brayboy Denison, Marianna, AR; four grandsons: Nathaniel Johnson, Jr., Jae Von Johnson, William Brooks & Ralph Oliver, Jr.; granddaughters: Ralphenia Oliver and Tanisha Oliver Arnold, Jada Flannel, & Genevia Jordan; fourteen great-grans; ten great-great grandchildren; five nieces: Christine, Doris, Wilma, Rebecca, Twymeter; one nephew: Donald, and a host of cousins and the Pilgrim Church Family. Family and Friends are cordially invited to join the services via ZOOM if you are not able to attend. Click the link to log in: https://us02web.zoom.us/j/84883316342?pwd=eHU3YlNXa2I1RE45RkYzNjlsMVpxUT0 and the Password is: Johnson

You can show your support by sending flowers directly to the family by contacting Debbie's Flowers 870.633.2225 or by visiting www.etsy.com/shop/ShopYABAS Roosevelt Johnson was born on July 14, 1926 to the late Walter and Lee Berter Johnson... View Obituary & Service Information

The family of Mr. Roosevelt Johnson created this Life Tributes page to make it easy to share your memories.