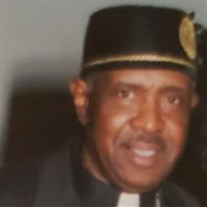 You can show your support by sending flowers directly to the family by contacting Debbie's Flowers 870.633.2225 Mr. Virgil Lee Mixon, Sr. on September 1, 1939 in Madison, AR, the union of Joe Horace and Ernestine Mixon. When his father passed while he was 13 years old, he transformed into the man of the house and helped his mom raise his two brothers and sisters. He truly loved his family. The family attended St. John Baptist Church in Madison, AR. He attended Lincoln High School in Forrest City, Arkansas until 1957. He enjoyed playing baseball and was very proud of the team members and their accomplishments. Mr. Mixon spent a lot of his life traveling and singing. He sang with the Delta Jubilees and later formed the Sensational Golden Stars of Chicago, Illinois along with his brother Earl Mixon. They continued singing throughout their adult lives, and later sing with their family members. They brought joy to their listeners as they sang praises unto the Lord. In 1957, Virgil wedded Ms. Eliza Porter. Soon after, the family moved to the west side of Chicago. Their delight were their children: Joanne, Shirley, Virgil Jr. (Tanya), Sharon, Melvin, Elvin, James (Royce), Kenneth (Laura) and Dionne. Mr. Mixon engaged in multiple entrepreneur endeavors: Allied Steel, John M. Smythe and Company, Millis Transportation, Mixon and Sons Moving and Hauling and home repairs. In 1966, Virgil married Ms. C. Alice Hopson, to this union, one daughter was born, Robyn. Virgil joined St. Coles Temple Church of God in Christ in East Chicago Heights, IL in 1972 under the tutelage of Elder Roosevelt Hopson. He was asked to pastor New Era Missionary Baptist Church in 1983 but a fire destroyed the church and he and the congregation fellowshipped with New Jerusalem and Thyatira Church until they found a new church home. In 2004 Elder Mixon decided to place the congregation in the hands of his loving and anointed wife, Pastor Alice Mixon, and he was deemed the Overseer of Christ Our Savior Outreach Ministries, when he concurrently worked the ministry of St. Mary's Church in Madison, Arkansas. Preceding him in death were both parents, Joe Horace and Ernestine Mixon: two daughters: Linda and Joanne; one brother: Weldon Mixon. He leaves his family, in the hope of being resurrected with our Great and Awesome God Jehovah, his wife C. Alice Mixon, all of his children, grandchildren, great grand-children and his great-great grandchildren; his brother Earl (Gertrude), sisters, Christine and Ruthie; his four maternal aunts, a host of nieces, nephews, cousins, relatives and friends.

You can show your support by sending flowers directly to the family by contacting Debbie's Flowers 870.633.2225 Mr. Virgil Lee Mixon, Sr. on September 1, 1939 in Madison, AR, the union of Joe Horace and Ernestine Mixon. When his father passed... View Obituary & Service Information

The family of Overseer Pastor Virgil Mixon created this Life Tributes page to make it easy to share your memories.