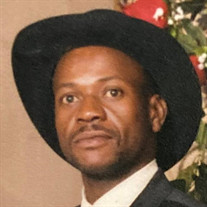 You can show your support by sending flowers directly to the family by contacting Debbie's Flowers 870.633.2225 or by visiting www.etsy.com/shop/ShopYABAS On Dec 10, 1966, Obie Lee “Sugar Bear” Wright “was born to Willie and Hattie Wright. He was the third child of 9 born to the Wright's. As a little boy Obie loved to go into the kitchen to eat sugar. Even when his mother (Hattie) would put it in a high cabinet he would manage to get to it, like the time she caught him with a chair getting on the counter. His family started calling him “Sugar Bear”. As Obie grew into a young man it was evident to anyone that knew him that he LOVED his FAMILY. He would make sure he visited HIS PEOPLE, often spending the night with his Big Moma: Luiza Rucker and his Uncles: Rolfe, Albert and Randolph Wright; His “Crew”was made up of his eldest brother Rocky and many of his cousins as well as the many friends he made along the way. During his high school years at Forrest City High, he became a member of the Omega Diamonds Fraternity. The friendships he gained in his school chapter resulted in lifelong friends. Also during his high school years Obie met Ann Brewer. On January 17, 1987 Obie Lee married his high school sweet heart. To this union Benjamin Jordan Wright and Terrence Alexander Wright were born. His beloved sons were his pride and joy. After graduating High School, Obie pursued a Career in Auto Body Repair, working alongside his father Willie until his health no longer allowed. His skills were among the best, because he was taught by whom he said was the Greatest, his father Willie. Obie was the life of the party at any event he attended. He was a jokester and sometimes a prankster. Like the time he decided to pay his eldest sister Donna back some money he had borrowed from her. He didn’t tell her he had gotten the money from her purse. He paid her back with her own money. We can’t forget the time that he put the dead snake (or so he thought) in the closet, trying to scare his mother, only to discover when she open the closet the snake slithered out and he ran scared. We still laugh about the time he put the fire cracker in Uncle Albert cigarette. A spade game wasn’t too far away if he was around. Obie was willing to lend a helping hand, he would talk crazy to you but he would do what he could. His nieces and nephews know him for saying,” Understanding is the best thing in the world”. Obie was a Classic like the 1967 Blue and White Chevrolet he drove for years. Obie’s memory hasn’t ended because he is asleep in death. His memory will be cherished by all those that love him. Obie is preceded in death by his grandparents: Guy and Earthie Wright, Holden and Luiza Rucker. His beloved Uncles: John, Guy, Robert, Albert, Fenner, Rolfe, Earnest and Marvin Wright; Clarence, Samuel, Nehemiah, Joe, David and L.C. Rucker; His beloved Aunts: Bertha and Earnestine Rucker. He leaves to cherish his memory: His Father and Mother: Willie and Hattie Wright of Forrest City, AR; His Sons: Benjamin Jordan Wright (Angelia) and Terrance Alexander Wright (Sharavon) of Forrest City, AR; His siblings: Donna Douglas (Gary) of Forrest City, AR; Rocky Wright (Abigail) Of Little Rock, AR Simpson Wright of Pine Bluff, AR; Stevie Wright(Dana) of Memphis,TN; TraWanda Wright of Forrest City, AR; Prentice Wright of Forrest City, AR; Shundra Wright of Rochester, NY; Eric Wright (Sharon) of Forrest City, AR; 5 grandchildren: Letrinity, Chloe, Cori, T.J. and Cayli; 13 nephews: Gary Jr., Shelby, R.J. ,Prince Stevie Jr., Stephon, Keinan, Jackson, Justyce, E.J., T’untae , De’untae, Kevin and 9 nieces: Rosland, Raquel, A.J., Nadia, Deidre, Chelsey, Charisse, Cameshia, Chanetra) Ozell Starks and Travon Howard (whom he loved dearly). A host of cousins, uncles, aunts, and friends.

The family of Mr. Obie Lee Wright created this Life Tributes page to make it easy to share your memories.