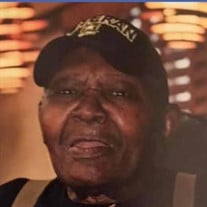 You can show your support by sending flowers directly to the family by contacting our office to be directed accordingly. Virtual attendance is available and may be accessed by clicking this link “Webcast” icon on his' tribute wall. It will be only 100 participants allowed on the zoom memorial service for Mr. Turner. Password to enter is: Turner O D Tuner was born 3 December 1925 in Birdie, MS. He accepted Christ at an early age. He united in matrimony with Sweetie Partee and with this union they laid the foundation for their family. Later in life he became a member of Mount Tabor Missionary Baptist Church. He served in the Army Air Corps, a World War II Veteran who proudly served his country. He was employed as a truck driver for several years. In 1955, they moved to Helena, Arkansas and he became an established mechanic and business owner of Turner’s Grocery and Pool Hall for many years. Mr. Turner cherished and supported his family and was always eagerly anticipating Family Reunions. He was an impressionable person that once you met him, you would NEVER forget him. His pastime was fishing and challenging board games, table games, and other sport activities. He was a self-proclaimed Spades and Dominoes Champ! Mr. Turner departed this life on 3 February 2021. He leaves to cherish his memory: his daughters, Carol L. Brown of Flint, Michigan; Lula Belle Turner-Sellers of West Helena, Arkansas; Martha (Larry) Baker of Richmond, Virginia; Mary Ann (Ulysses) Kelly of Silver Springs, Maryland; Elizabeth (Kenny) Spates of Helena, Arkansas; his sons, Otis Turner of Springdale, Arkansas; Doris (Edna) Turner of Helena, Arkansas; Robert (Catherine) Turner of Little Rock, Arkansas; OD Turner Jr. of St. Louis, Missouri; Odis Turner of Illinois; a host of grandchildren, great grandchildren, and great-great grandchildren; along with a host of cousins, other relatives, friends and neighbors. Mr. Turner was preceded in death by his wife of over 54 years, Sweetie Idencia Turner; daughter, Luella Marie Jean Ford; Son-in-Law, Ulysses Brown Sr.; grandson, Phillip Andre’ Brown; mother, Beulah House; and father, Robert Turner Sr.

You can show your support by sending flowers directly to the family by contacting our office to be directed accordingly. Virtual attendance is available and may be accessed by clicking this link &#8220;Webcast&#8221; icon on his' tribute wall.... View Obituary & Service Information

The family of Mr. O D Turner created this Life Tributes page to make it easy to share your memories.