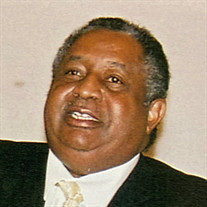 You can show your support by sending flowers directly to the family by contacting Debbie's Flowers 870.633.2225 or by visiting www.etsy.com/shop/ShopYABAS Nolan began life in Palestine, Arkansas as the youngest child born to Reverend Johnnie and C. Bell Quarrells. Nolan was raised in a loving Christian home and as a result, accepted Christ at an early age at Hedge Providence M.B. Church, in Palestine, Arkansas. Nolan graduated from Palestine Elementary School. He attended Lincoln High School and graduated from Palestine High School in 1969. Nolan served in the United States Army from 1972-1974. It was after his return from service that he married his best friend and the love of his life, Carolyn Willis on August 17, 1974. The couple was blessed with one daughter, Tiffany Renee’ who was born in 1983. Nolan and his family settled in Helena, Arkansas where he was employed by Entergy Arkansas (Formerly Arkansas Power and Light). He worked at the Robert Ritchie Plant in Helena from 1974 until his retirement in 2004. Nolan and Carolyn were active members of Jackson Chapel Church of God in Christ under the leadership Of Pastors Elder Horace Tatum, and Elder E.T James. Nolan and his family joined Christ Temple Church of God in Christ, under the leadership Bishop Dr. Alex J. Smith. Nolan served as a Sunday School teacher, and the Sunday School Superintendent, and head Deacon. He was ordained a deacon on September 2, 2001. Nolan served as the Helena-West Helena District Deacon President from January 2005-2015; Vice President of the Arkansas First Jurisdiction COGIC Deacon Board in 2008. When Nolan was not spending time with his close and loving family, his time was spent reading his Bible. Nolan lived his beliefs. Although he was soft spoken, he was a great motivator and always had an encouraging word. His favorite songs were “Open the Flood Gates of Heaven” and “Welcome Holy Spirit”. Although he had been ill, his health began to fail after his beloved Carolyn went home to be with the Lord in July 2020. The Lord called him home on April 20, 2021 at Baptist Desoto Hospital in Southaven, Mississippi. He was predeceased by his wife of 45 years, Carolyn Willis Quarrells, his parents, and 11 brothers and sisters. Nolan will be forever missed and live in the hearts of everyone who loved him. He leaves in God’s care, his daughter: Tiffany Renee’; brother: Leon Quarrells, Apopka, FL; sisters in law: Clarene Quarrells, Memphis, TN, and Emma Quarrells, Chicago, IL; his nieces, nephews, cousins, Pastor Bishop Dr. Alex J. Smith and the Christ Temple COGIC family, Deacon Lafonza Barton, his great friend and Deacon brother, his colleagues from Entergy Arkansas, and a host of friends.

You can show your support by sending flowers directly to the family by contacting Debbie's Flowers 870.633.2225 or by visiting www.etsy.com/shop/ShopYABAS Nolan began life in Palestine, Arkansas as the youngest child born to Reverend Johnnie... View Obituary & Service Information

The family of Deacon Nolan Quarrells created this Life Tributes page to make it easy to share your memories.