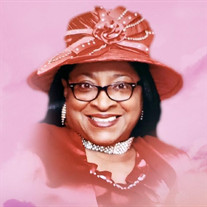 Pearlene Barnett was born January 13, 1964 to Amos “Dad” and Rosie Lee Burgess in Round Pond, Arkansas. She was one of twelve children. She and her siblings were raised in church and taught the value of hard work. Pearlene was preceded in death by her father, mother, and brother Freddy Burgess. Pearlene married Elder Mark Barnett on December 7, 1980 and to this union two sons were born: Marcus LeAndrea Barnett and Marvin Deshaun Barnett. Pearlene was a strong pillar of strength in her community who urged everyone to go to church, get as much education as you can, and live your best life. Pearlene was a proud breast cancer survivor for over fifteen years. Pearlene was described by loved ones, colleagues, and those who knew her best as a “go getter.” She was outspoken, brilliant beyond her years, and a mighty force. Pearlene Barnett, RN,BSN,MSN,APRN - worked in the nursing profession for many years. After retiring from the Department of Human Services Head Elder Choice Nurse position in 2016, she became a full-time “granny” and missionary. She traveled, shopped, served as a caretaker to the sick, all while maintaining being very active with her church. Pearlene served as more than the Pastor’s wife. She had a passion for the youth. Pearlene departed this life on December 30, 2019 leaving fond memories with her loving husband and two sons: Marcus LeAndrea Barnett, Sr., and Marvin (Monica) Barnett. She was the very proud and active grandmother to seven grandchildren: Tachoriah, Marcus Jr., Marvin, Za’Miyh, Maria Pearlene, Malia, and Miranda. Her siblings will miss her dearly. She is survived by five sisters: Roberta (Robert) Echols, Nancy Ann Burton, Ruthie (Cleave) Whitby, Bernice (Kenneth) Word, and Bernetta (Roderick) Jones; five brothers: Jonathan (Alma) Burgess, Sr., Amos (Doris) Burgess, Jr., Terry (Pauline) Burgess, Sr., David (LaSonya) Burgess, Sr., and Elbert (Debra) Burgess. She leaves aunts, uncles, cousins, and best friends who enriched her life.

Pearlene Barnett was born January 13, 1964 to Amos &#8220;Dad&#8221; and Rosie Lee Burgess in Round Pond, Arkansas. She was one of twelve children. She and her siblings were raised in church and taught the value of hard work. Pearlene was preceded... View Obituary & Service Information

The family of First Lady Missionary Pearlene Barnett created this Life Tributes page to make it easy to share your memories.