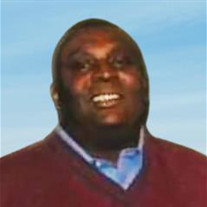 You can show your support by sending flowers directly to the family by contacting Debbie's Flowers (870) 633-2225, West Helena Flowers & Gifts (870) 572-3446, The Blossom Shop (870) 572-3790, and WATSON'S FLOWER(870) 572-3755 or by visiting www.etsy.com/shop/ShopYABAS Michael Leonard Willie left his earthly temple to dwell in the arms of our Lord and Savior on October 21, 2021. Michael was born on May 20, 1968, to Swinoil and Estella Moore Willie in West Helena, AR. Mike gained his love of sports from his beloved mother, Estella Willie and he carried it throughout his lifetime. Mike was a graduate of the Central High School Class of 1987 where he excelled in football and basketball. After graduation he enlisted in the U.S. Army where he served for 4 years and received an honorable discharge. After his discharge he moved back to his hometown where he became an important part of mentoring the youth in his community by introducing them to sportsmanship. He was integral in establishing and coaching the Pony and Little League Baseball program in the City of Helena-West Helena at the age of 16 and he later became the Commissioner of Little League. He also created a summer basketball league at Douglas Court in West Helena where he coached and mentored hundreds of young men. He served as Assistant Basketball Coach at Arkansas State University and the University of Arkansas at Pine Bluff. He later worked for the City of West Helena and the Helena West Helena School District in several different capacities. Mike then found another passion – he became a car salesman where he was known throughout the Tri-State area as “Dealmaker”. He served as Assistant General Manager for several car dealerships and broke many sales records during this time. He continued in the car sales industry until recently when his health declined. Mike was preceded in death by his Daughter– Ashley Vineyard; Parents, Swinoil and Estella Willie; Grandmother – Viola Banks; Sisters– Cynthia Willie, and Rosie Lee Willie; and Brother– Larry Early. He leaves to cherish his memories his son– Terrance Sheared (Laticea) of Houston, TX; Six brothers– Oscar Willie of Los Angeles, CA; David Early (Cynthia) of Jackson, TN; Raymond Willie (Jeanette) of Helena, AR; Kenneth Willie, Gregory "Buck" Willie (Rebecca), and Norris Willie all of Jonesboro, AR; Eight sisters– Sharon Crawford (Chris) of Dallas, TX; Jacqueline West (Eric), Cheryl Webb (Timothy), and Carla Sullivan (Simuel) of Jonesboro, Tracey Willie of Lancaster, TX, Debra Willie of Lewisville, TX; Sondra Willie, and Barbara Greer (Jimmy) of Jonesboro, AR. He also leaves five grandchildren– Terrance Sheared, Jr. (TJ), Lawson Sheared of Houston TX; Caiden Hurd, Malaya Blocker, and Maluni Blocker of West Helena. Michael also leaves a host of amazing nieces and nephews who affectionately called him “Big Fella”. Mike enjoyed life and most of all enjoyed sports; he was a diehard fan of the Arkansas Razorbacks, Dallas Cowboys, Los Angeles Lakers and the Atlanta Braves. Most weekends you would find him in front of a television watching and cheering on his favorite teams as well as being surrounded by family and friends.

The family of Mr. Michael Leonard Willie created this Life Tributes page to make it easy to share your memories.