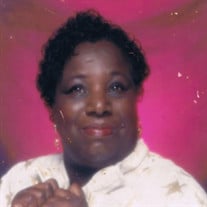 You can show your support by sending flowers directly to the family by contacting Debbie's Flowers 870.633.2225 Martha Jane (Pendleton) McNairy is the third child. Martha means Lady in Aramaic and Jane means “Believer in a Gracious God” in Hebrew. “The Humble One” Martha (Pendleton) McNairy is the third child of Mr. Robert Pendleton, Sr. and Eliza Pendleton. She was born in Heth, Arkansas and attended DeRossitt Elementary and High School in the Forrest City School District. She was married to Sherman McNairy until his death on April 18, 1980. This union, there were five children, Barbara, Tony, Anthony, Christina, and Eliza. Her youngest child is Robert Wick. Martha has been a housewife caring for her children. Her husband ensured that she was cared for after his death. Martha is a wonderful and loving sister who always tried to do the best for her family and remained supportive in many situations. Beacon On the Hill Award | Mr. Robert, Sr. Mrs. Eliza Pendleton Family Reunion | August 7, 2015 to August 10, 2015 Martha Jane (Pendleton) McNairy The Third Child | “The Humble One” (A SPECIAL LADY WHO ALWAYS HAD YOUR BACK) Martha is a dear, wonderful, loving, kind, gentle, and courageous daughter, sister, aunt, mother, and a quiet leader in the family. She has provided support to our families in time of distress and maintain a calm exterior of nonjudgmental attitude. Martha name means “A lady and a mistress of her home.” Martha, raised her family alone after her husband Sherman “Flint” McNairy died. She sacrificed a lot for her children. She leaves to cherish her children: Barbara (Derrick), Tony (Chrisma), Anthony, Christina (Duke), Eliza (Eugene) & Robert (CJ). Grandchildren: Tyera, Alisha, Simone, Christopher, Marianne, Terry, Jarvis, Xavier, Jasmine, Kenneth, Takyla. Jamari, Ava. Great-Grandchildren: Ahtyianna, Tyrice, John, Aria, Jay, Tia, Johnathan, and Jediah. She also leaves her Siblings: MaeBell Young- Washington, Lessie Dee Pendleton- Driver, Robert Pendleton, Varry Pendleton-Surratt, Barry Pendleton, Ruby Pendleton-Johnson. She is preceded in death by parents, late Husband, Mr. Sherman McNairy; and siblings: Stella Pendleton Jones, Nancy Pendleton Smith, and Nathaniel Young. Christina McNairy stated “My mom took care of me and she taught me about things in life that helped me make my own decisions and stick with them. And she taught me about God and His loving grace. “Derrick Surratt stated “Aunt Martha was kind and treated me good.” Tonya Smith stated “Aunt Martha has always welcome me into her home with opening arms. I will always love Aunt Martha forever, because she loved and accepted me without hesitation. Barbara, Tony, Anthony, Christina, Eliza, and Robert stated “She is the BEST mother in the world and we will love her forever.” Martha Jane McNairy, has made our lives better in many countless ways and we will always love and appreciate you. I will love you forever! We will love you, forever!

You can show your support by sending flowers directly to the family by contacting Debbie's Flowers 870.633.2225 Martha Jane (Pendleton) McNairy is the third child. Martha means Lady in Aramaic and Jane means &#8220;Believer in a Gracious God&#8221; in... View Obituary & Service Information

The family of Mrs. Martha McNairy created this Life Tributes page to make it easy to share your memories.