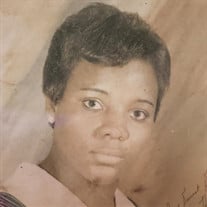 Mae Catherine “Cat” Williams was born on January 7, 1950, in Forrest City, AR, to the late Louis “Jim” Williams and Millie Hardin-Williams. Mae was the sixth child of the “Grateful Eight.” Jim and Millie had five daughters and three sons. Mae is a graduate of Lincoln High School, Class of 1968. She attended AM&N College (now the University of Arkansas at Pine Bluff) for two years, majoring in Home Economics. In 1970, she married her high school sweetheart, Edward Lee Harris. They were married on May 30, 1970. From this union, one daughter was born, Sherlyn Kimberly Harris. Mae accepted Christ at an early age at Jerusalem Missionary Baptist Church, where she remained a faithful member until retreating in 2016 due to her illness. Mae loved her church. Being a woman of God and His humble servant, she served in multiple roles at the church, President of the Usher Board, Church Secretary, Financial Secretary, Treasurer, and a member of the Kitchen Committee. She wore many hats, but she perfected the role and duties of an “Usher.” Mae was a long-time member of the Arkansas State Ushers Federation. She loved her coworkers, clients, and people in general. Mae never met a stranger and always offered a lending hand in any situation. For instance, she loved cooking and baking for family, friends, and the community. Mae was best known for her lemon and caramel cakes. The greatest joy in her life was spending time with her grandchildren and great-grandchildren. Mae started her career in the manufacturing industry in the early ’70s at Reltoc Sewing Factor. She continued her manufacturing career at Thorn Apple Valley, Clarison’s, and later retired from Bellville Shoe Factory in 2016. While being wife and mother, Mae had another passion. In 1979, she graduated from the well-known Allura’s Beauty School in Memphis, TN. While attending school, she worked as an apprentice alongside Ms. Lois Malone. Mae worked with Ms. Malone for several years before stepping out on faith and becoming the owner and operator of her beauty salon, Mae’s Beauty Shop, in 1984. Mae dedicated over 30+ years to serving the community. She scheduled her appointments to satisfy the needs of her clients, and she always did it with a smile. Mae transitioned to her heavenly home on Saturday, December 11, 2021. She was preceded in death by her parents, Louis and Millie Williams; three sisters, Lillie Mae Nelson, Bertha Lee Williams, and Lorece Withers; three brothers, Charley Louis “Mike" Williams, Verlon Williams, Sylvester “Bruh” Williams, and her sister-in-love, Elnora Austin. She leaves to cherish loving memories to her husband, Edward Lee Harris, her only child, a daughter, Sherlyn Kimberly Harris, one granddaughter, Darielle Qui’Lahn Morris (Chris), and one grandson, Kenneth Wayne Ward, Jr. (Lil Ken). Five great-grandchildren; Theotis Darryl Thornton, Jr. (TJ), Taylor Dorothy Thornton, Tierney D’Mae Thorton, Kein Lee Ward, and Kynna Jai Ward, all of Little Rock, AR; one sister, Victoria Williams of Cleveland, OH; a special friend, Icyphine Greene, and a host of nieces, nephews, cousins, and friends.

The family of Mrs. Mae Catherine Williams Harris created this Life Tributes page to make it easy to share your memories.