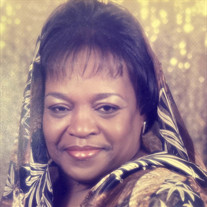 You can show your support by sending flowers directly to the family by contacting Debbie's Flowers 870.633.2225 Lillie Rose Wright Crawford was born January 2, 1949 to Rosie L. Beard and Roscoe Parker. She departed this life October 16, 2020. Lillie was raised by her grandparents, Lula and Bryson “Pete” Wright, both of whom preceded her in death. She professed hope in Christ at an early age under the leadership of Reverend L. Z. Jones at Mt. Olive Baptist Church. Later she joined Church of the Living God Temple #273 under the leadership of Elder M.T. Denton. She held many jobs there: Director and Vice President of the Choir, President of the Women Work Committee, and Sunday School Teacher. She retired from the Department of Human Services with 38 years of service. Lillie was a fun loving, caring person. She was loved by many and will be truly missed by anyone who had the opportunity to know her. On December 22, 1984 she was united in holy matrimony to William M. Crawford, and to this union Christopher Douglas was born. William preceded her in death. Lillie leaves to cherish her memory her mother— Rosa Beard; son—Christopher—special daughter—Tina (Timothy); grandchildren—Chrishell, Mardaisa, Anthony, Christopher D., Jr., Tempest, and Mekhi; five sisters—Ruthie Lee Haggans of Forrest City, Arkansas, Gladys Beard, Katie Beard, and Blanch Anderson all of Springfield, Illinois, and Wanda Sanderlin (Charles) of Nashville, Tennessee; four brothers—Joseph Beard and Urlies (Angela) Beard of Forrest City, Arkansas, Aubrie Beard (Malene) of Springfield, Illinois, and David Parker of Little Rock, Arkansas; two aunts—Burniece Luckett of Munster, Indiana and Lue Bertha Dawson of Forrest City, Arkansas; one uncle—Elder Ozell Wright (Diane); and a host of nieces, nephews, family, family-like, and friends.

You can show your support by sending flowers directly to the family by contacting Debbie's Flowers 870.633.2225 Lillie Rose Wright Crawford was born January 2, 1949 to Rosie L. Beard and Roscoe Parker. She departed this life October 16, 2020.... View Obituary & Service Information

The family of Mrs. Lillie Rose Crawford created this Life Tributes page to make it easy to share your memories.