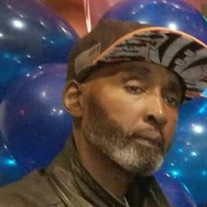 You can show your support by sending flowers directly to the family by contacting Debbie's Flowers 870.633.2225 or by visiting www.etsy.com/shop/ShopYABAS Lee Andrew Wright was born on December 20, 1961 in St. Francis County [Forrest City, Arkansas] to the union of Ocie L. Wright and Elnoria Anthony Wright. Lee confessed a hope in Christ at an early age at Prosperity Missionary Baptist Church and recently joined the Stanley Grove Missionary Baptist Church under the leadership of Pastor Anthony Lewellen. He attended school at Evans Elementary in the Forrest City School District and graduated with the class of 1980 and furthered from 1981-1982 his education at the University of Arkansas at Pine Bluff on a four-year scholarship. Lee was an exceptional footballer during his tenure in high school and college as well as track and field. He worked for many years for Alderson and Alvin Brothers Farm right by his father’s side and for Arkansas Democrat Gazette as a press operator. Lee was always full of fun, and his heart was always full of love. Never turning down a chance to give or show his love, and it was always a delightful adventure with him. He was preceded in death by his parents, Ocie L. Wright and Elnoria Anthony Wright; his oldest sister, Helena Jean Wright. He departed this life and gained his wings on September 23, 2021 at CrossRidge Community Hospital in Wynne, AR. He leaves behind his siblings, Willie Francis Wright of Forrest City, AR, Annette Hardimon of Widener, AR, Mae Louise Wright of Little Rock, AR, Ocie Renee Wright of Little Rock, AR, Bobbie Faye (Clark) Mitchell of Niles, MI, Carolina Wright of Forrest City, AR, Ronald (LaTonya) Wright of Wynne, AR; aunts, Earnestine Steward of Forrest City, AR, Dollie Pearson of Potts Town, PA, Emma Mae Goodwin of Forrest City, AR, Imogene Wright of Forrest City, AR of Forrest City, AR, and a host of nieces, nephews, cousins, other relatives, and friends

You can show your support by sending flowers directly to the family by contacting Debbie's Flowers 870.633.2225 or by visiting www.etsy.com/shop/ShopYABAS Lee Andrew Wright was born on December 20, 1961 in St. Francis County [Forrest City,... View Obituary & Service Information

The family of Mr. Lee Andrew Wright created this Life Tributes page to make it easy to share your memories.