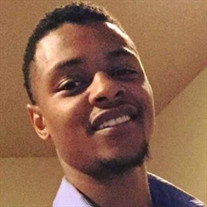 You can show your support by sending flowers directly to the family by contacting Debbie's Flowers 870.633.2225 or Eva's Little Flower Shop 870.238.9264 Kentarius Montrell Scott “Peanut” was born January 3, 1995 in Forrest City, AR to Elizabeth Jones and Christopher Scott, Sr. He attended Forrest City Jr. High School and graduated from Palestine-Wheatley High School in 2013. He was currently attending Philander Smith College majoring in Business and was a member of the Spring 19’ Beta Tau Chapter of Kappa Alpha Psi Fraternity Inc. He applied to CDL school and planned on joining the United States Air Force after college. Peanut was employed by Positive Results where he did landscaping. He planned on starting his own landscaping company one day. He was in the process of starting a mental health program called Mental EsKape that would help people reach their life goals and find their God-given talents. He volunteered at the local homeless shelter with his Fraternity brothers. Peanut and his girlfriend, Regine, had their own YouTube channel for young couples. He also had a YouTube channel with his sister Jayda, for video gamers. Peanut made and sold T-shirts and aspired to become a motivational speaker one day. Peanut professed his life to Christ at an early age, where he was baptized at Hedge Providence Baptist Church in Palestine, AR. He later attended Warren Hill Baptist Church and St. Mark Baptist Church in Little Rock, AR. Peanut was adventurous, he loved animals, and spending time with family and friends. He loved to travel and play basketball. He is survived by his parents Elizabeth Jones of Little Rock, AR and Christopher Scott, Sr. of Forrest City, AR. One sister: Jayda Fingers of Little Rock, AR. Three brothers: Christopher Scott, Jr. of Little Rock, AR, Anthony King and Jalen Scott of Memphis, TN. He is also survived by his paternal grandmother Betty Scott of Forrest City, AR. He is preceded in death by his paternal grandfather Edward Scott, Sr. of Forrest City, AR. His maternal grandparents Cleophus and Evelyn Jones of Forrest City, AR. He also leaves his girlfriend Regine Simmons and best friends Nick and Isaiah Williams. He had a host of nieces, nephews, uncles, aunts, cousins, and special friends.

The family of Mr. Kentarius Montrell Scott created this Life Tributes page to make it easy to share your memories.