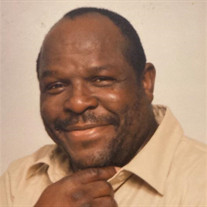 You can show your support by sending flowers directly to the family by contacting Debbie's Flowers (870) 633-2225, or by visiting www.etsy.com/shop/ShopYABAS Kenneth James Sweet Agnew was born October 12, 1952, to Georgia L. Agnew and Mack Agnew, Sr. He passed away peacefully on April 4, 2022 in North Little Rock, Arkansas. At an early age he accepted Jesus Christ as his Savior, and later he became a member of First Baptist Church. Kenny attended the Forrest City School District, where he was a star football player. Kenny was a Machine Operator at Mueller Copper Tube for thirty five years. He retired in 2014. Kenny was a great person, a family man, the life of the party, and most of all an excellent father. He would give you the shirt off his back. He had a big heart and an even bigger smile to match. He enjoyed playing cards, going to the casino, playing the boards, going to the Blue Flame, and the dog track. One of his favorite lines was “What it’s hitting fa.” He loved children. He regularly donated to Feed the Children and many other charities that helped children. Kenny loved, and he loved big! Kenny enjoyed family and having a great time with his friends. He is preceded in death by his parents—Georgia Agnew and Mack Agnew, Sr.; his sisters—Rayola Carter and Charlotte Nelson; and one brother—Harry Thomas. He leaves to carry on his legacy one daughter—Chari Sweet Agnew (Brittany), who was his pride and joy. Oh, how much Kenny loved his Daughter, “Pooh”. He leaves one bonus son—Terry McDowell (Alva) whom he raised as his own. Kenny also gained two stepdaughters—Kendnona and Kentara Coleman. Also Kenneth leaves five grandchildren—Anastaisa Lewis, Janeem Lockett Agnew, Kade Summerville, Kali Jae Randle, Tyce Johnson. Kenny has three sisters—Sylvia Russell, Annie Harris (Butch), and Rachelle Rawlings; two brothers— Mack Agnew, Jr. (Cozetta), Willie Agnew (Lisa); and a host of nieces, nephews, cousins, extended family and many friends.

You can show your support by sending flowers directly to the family by contacting Debbie's Flowers (870) 633-2225, or by visiting www.etsy.com/shop/ShopYABAS Kenneth James Sweet Agnew was born October 12, 1952, to Georgia L. Agnew and Mack... View Obituary & Service Information

The family of Mr. Kenneth James Sweet Agnew created this Life Tributes page to make it easy to share your memories.