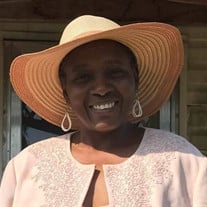 You can show your support by sending flowers directly to the family by contacting Debbie's Flowers 870.633.2225 or by visiting www.etsy.com/shop/ShopYABAS On Sunday, August 15, Judy Carol (Belt) Ibezim joined God’s heavenly choir. Judy was born on July 4, 1964 in Colt, Arkansas, and she has been a firecracker ever since. She was the eighth child born to Future Mae and Joe L. Belt. She received early Christian training at her home church of Jericho Church of God in Christ. She graduated from Forrest City High School, and then she attended the University of Arkansas at Pine Bluff and the University of Arkansas at Little Rock, where she obtained a Bachelor’s in communications and participated in ROTC. Judy married Willie Ibezim on July 19, 1989, and together they had five loving daughters  Angelica (Fortney), Audrey, Ayolah, Arlinda, and Arniece. They remember her as a bright, passionate woman with fiery resolve. As a mother, she emphasized education and encouraged creative exploration. She was a deeply faithful woman who ensured her children were involved in practically everything church had to offer, from dance, to step, to choir. She attended Greater Community Temple in Memphis, TN for over twenty years, and served on the missionary board, sang in choir, directed the children's choir, and even started a puppet ministry. After a stint in the Army Signal Corp, Judy went on to nursing school (obtaining her RN and BSN) and used her training in various settings, including hospitals, nursing homes, home health, and even teaching. She loved the challenge that nursing brought and excelled before mental health struggles caused her to retire. However, while nursing was her career, music was her passion. Judy recorded an EP of original songs and performed throughout the tri-state area. She could often be heard singing while performing household tasks and continued recording music into her later years. Judy's transition to ancestor reunited her with her parents; her brothers, Robert Patrick Belt and Ronald Clint Belt; and her sister Charlotte Belt Falls. Among those still here to honor her memory are her husband; her five children; her five remaining sisters (Beverly Bynum, Velerie Key, Vashti Belt, Pamela Taylor, and Francelia Hamilton); her five remaining brothers (Joe Belt, Jr., Emmanuel Belt, Carl Belt, George Belt, and Keith Belt); her aunts, and numerous nieces, nephews, and cousins. She will be deeply missed.

The family of Mrs. Judy Carol Belt Ibezim created this Life Tributes page to make it easy to share your memories.