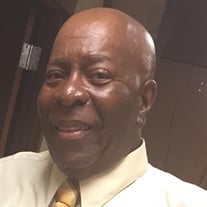 You can show your support by sending flowers directly to the family by contacting Debbie's Flowers 870.633.2225 or by visiting www.etsy.com/shop/ShopYABAS Jonathan Burgess, Sr. affectionately known as “B.B.” was born May 12, 1953 to Amos “Dad” and Rosie Lee Burgess. He was the second child and oldest son of twelve children. Jonathan received his high school diploma from Lincoln Senior High School in Forrest City, Arkansas, where he participated in football and art clubs. Jonathan married the love of his life, Alma Golatt Burgess, on December 16, 1973. They were blessed with six children: Kenneth Burgess, Karen Burgess, Leonard Burgess, Jonathan Burgess, Jr., Jeffery Burgess, and Tracey Burgess. Jonathan was known as a farmer, hard worker, provider, exceptional musician, landscaping (cutting grass) where he relaxed in serving others, and above all an outstanding husband. Quartet groups from everywhere looked forward to “B.B.” showing up to play for their group. He sang with his father’s group, The Delta Jublairs for 56 years and was a founding member and musician. “B.B’ was a generous man who quietly took care of others. He loved music. He had the uncanny ability to play all sorts of musical instruments well. He played the piano, flute, the guitar (bass and lead which was his favorite.) He lived a full, wonderful life. He was the rare person who exceeded his dreams. He personified the best of the work ethic. “B.B.” worked for W.M. Barr in Memphis, TN for many years. He served in many roles at Cedar Grove Church of Jesus Christ in Round Pond, Arkansas. He often referred to himself as a historian. He told captivating stories to the church family and youth department. Many of those stories will forever be cherished. He was a faithful member there all of his life where he was saved at an early age. He served as a deacon and musician. Jonathan was preceded in death by his father, mother, brother: Freddy Burgess, and sisters: Pearlene Barnett and Bernetta Jones. Jonathan “B.B.” Burgess, Sr. departed this life on September 26, 2021 at 5:45 PM at his home with his family by his side leaving precious memories with his family. He leaves to cherish his memories of 48 years, his loving wife, Alma Golatt Burgess; children, Kenneth (Barbara) Burgess, Karen (Val Porter) Burgess, Leonard (Jacqueline) Burgess, Jonathan Burgess, Jr., Jeffery Burgess, Tracey Burgess, Katrina Brown, Sandra Williams, Kresha Webb, Edgar Williams, and Altovise Swift; a host of grandchildren; great grandchildren; and great grand-children; four sisters, Roberta (Robert) Echols, Nancy Ann (Archie) Butler, Ruthie (Cleave) Whitby, and Bernice (Kenneth) Word; four brothers: Amos (Doris) Burgess, Jr., Terry (Pauline) Burgess, Sr., David (LaSonya) Burgess, Sr., and Elbert (Debra) Burgess; sisters and brothers-in-law, aunts, uncles, nieces, nephews, cousins, other relatives and friends.

You can show your support by sending flowers directly to the family by contacting Debbie's Flowers 870.633.2225 or by visiting www.etsy.com/shop/ShopYABAS Jonathan Burgess, Sr. affectionately known as &#8220;B.B.&#8221; was born May 12, 1953... View Obituary & Service Information

The family of Mr. Jonathan "B.B." Burgess, Sr. created this Life Tributes page to make it easy to share your memories.