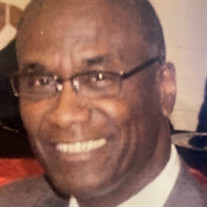 You can show your support by sending flowers directly to the family by contacting Debbie's Flowers 870.633.2225 Mr. Johnie Curtis was born on February 16, 1956, in Widener, Arkansas to the late George Wesley, Sr., and the late Alma (Fred) Ivy. At an early age, Johnie was immersed in a loving Christian community, and he confessed his own faith to our Lord and Savior. Later in his life, he committed himself to the congregation of Madison Light Missionary Baptist Church in Madison, Arkansas. Johnie departed this life on November 11, 2020, at the Mercy Lourdes Hospital in Paducah, Kentucky. He was preceded in death by his parents; his grandmother, Bessie Curtis; his sister, Wilma Curry; and his brother, Fredell Wesley. He attended Forrest City High School, where he proudly graduated in 1974. Soon thereafter, Johnie graduated Cum Laude from The University of Arkansas at Pine Bluff with a dual degree in Business Administration and Mathematics. As he studied, he was an active and dedicated member of both the Kappa Alpha Psi fraternity and the Vikings Bi Fidelity Society Incorporated. Johnie was an educator at heart –he retired after 27 years from Southcentral Bell in St. Louis, Missouri and was an adjunct Math Instructor at Arkansas State University Mid-South College in West Memphis, Arkansas, as well as a part time employee with FedEx. Above all, Johnie was deeply committed to cherishing and caring for his family. He is survived by his wife, Beatrice Curtis of Madison, Arkansas; his son, Jonathan W. Curtis of St, Louis, Missouri; and his daughters, Melanie Curtis of Dallas, Texas, Camille (Byron) Speller of Valencia, California, and Brandi (Rodney) Rowe of Temple, Texas. He leaves behind eight grandchildren. Johnie’s memory is also preserved through his brother, George (Lillian) Wesley Jr. of Chicago, Illinois, and his sisters, Bessie (Melvin) Peoples of Little Rock, Arkansas, and Mary (Luther) Buckingham of West Memphis, Arkansas. His aunts: Thelma Dortch, Lillie Elliot, and Vera (Henry) Jones of Memphis, Tennessee, Estella Wesley and Thelma Harris of Champaign, Illinois, and one uncle, Roosevelt Curtis of Widener, Arkansas. Two special cousins: Katherine Curtis and Barbara Mooney. He also lives on through a host of nieces and nephews. Johnie will be missed dearly by his family, and remembered fondly for his intelligence and strength of character. “I have fought the fight. I have finished my course. I have kept the faith.” -II Timothy 4:7 “remembering before our God and Father your work of faith and labor of love and steadfastness of hope in our Lord Jesus Christ. 4. For we know, brothers loved by God, that he has chosen you,.” -1 Thessalonians 1:3-4

You can show your support by sending flowers directly to the family by contacting Debbie's Flowers 870.633.2225 Mr. Johnie Curtis was born on February 16, 1956, in Widener, Arkansas to the late George Wesley, Sr., and the late Alma (Fred) Ivy.... View Obituary & Service Information

The family of Mr. Johnie Curtis created this Life Tributes page to make it easy to share your memories.