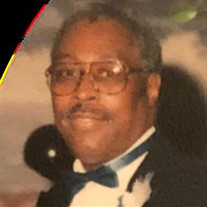 You can show your support by sending flowers directly to the family by contacting Debbie's Flowers 870.633.2225 or by visiting www.etsy.com/shop/ShopYABAS On Monday, March 11, 1940, John Edward King made his arrival into the world. The middle child of three siblings born to the late John W. King and Jerlene Williams King. John confessed a hope Christ at an early age at Freedonia M.B. Church in Beck Spur, AR. John grew up along with his sister Verlene and brother Lee Herman in the Beck Spur area. After moving to Forrest City, he attended Stewart Elementary School and was a proud member and graduate of the Lincoln School Class of 1957. Growing up John was not a stranger to work. You could find him at Harold’s Grocery, Graber’s Department Store, or walking the greens as a caddy to the many golfers at the Forrest City Country Club and served as a bar tender for special events. His most loved place of work was Moody’s Cleaners. He went from presser to owner and operator and provided service to the City of Forrest City and the surrounding communities for 61 years. There was not a day that you were not greeted with a warm hello, smile and a how can I help you? If you needed items pressed for events or pressed for time, he would make sure they arrived on time and in prefer condition. His motto was “If we can’t get it out. We’ll cut it out.” On Saturday mornings, you could find him at the cleaners watching the Razorbacks or any sports game until closing. John was the proud father of one son, Tony Bernard King. John quietly slipped away to his heavenly home on Sunday, September 26, 2021. He was preceded in death by his father; siblings, Verlene King Williams, and Lee Herman King, and nephew, Randy Williams. He leaves to cherish his memory, his son and daughter in love, Tony and Brenda King; mother, Jerlene W. King, of Forrest City, AR; uncles Robert (Marion) Williams of St. Louis, MO, Odis (Mae) Williams of Grand Rapids, MI; aunts, Mattie Williams and Mae (James) West both of St. Louis MO, as well as a host of nephews, nieces, cousins, in-laws and friends.

You can show your support by sending flowers directly to the family by contacting Debbie's Flowers 870.633.2225 or by visiting www.etsy.com/shop/ShopYABAS On Monday, March 11, 1940, John Edward King made his arrival into the world. The middle... View Obituary & Service Information

The family of Mr. John Edward King created this Life Tributes page to make it easy to share your memories.