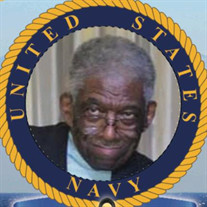 You can show your support by sending flowers directly to the family by contacting Debbie's Flowers 870.633.2225 Jessie “June” Driver was born August 9, 1929 in Grady, Arkansas to Will and Jennie Driver. He was reared in Wynne and resided in Forrest City, Arkansas until his death. He joined the United States Navy in 1945 and was honorably discharged in 1948 after a major illness. He was located and served in the military during the bombing of Pearl Harbor and took pride in being a world War II veteran. Jessie attended tailoring and watch-making school. He was a self-taught mechanic for decades and retired due to health reasons. Jessie was a devoted husband, son-in-law, father, grandfather, uncle, brother, church member, and more. Jessie loved God and expressed his faith in Christ and was baptized in 1969 at Christ Temple Pentecostal Church on B Street in Forrest City. He never met a stranger and made sure he greeted every- one. He would ask, “Do you know the Man (Lord)?” and proceeded to tell you how good God was. He was full of wisdom and did not mind sharing...and did so with all of us. His wisdom and love produced a family of love, kindness, respect, and genuine concern for others. Jessie was united in marriage to Stella Mae (Sain) Driver in 1953 and remained married until death. Jessie was preceded in death by his parents—Will and Jennie; daughter—Dianne Driver Bland; brothers—Eddie, Earnest, Willie Lee Driver; and sisters—Addie Dee Jones, Beulah Holmes Shy, Jennie Mae Wynne, and Dorothy Currie. Jessie leaves to cherish his memories his devoted wife of 67 years— Stella Mae; 2 sons and 8 daughters—Louis Driver and Janet Driver of Forrest City, Carolyn Robinson of Little Rock, Gloria Driver of Palestine, Gary (Sebastian) Driver of California, Linda Driver of Forrest City, Yvonne Driver Tomlin, Donna Driver and Deborah (Tony) Huntley of Palestine, and Karen Driver Fletcher of West Memphis; his brother— Joe (Ethel) Driver of Forrest City; 22 grandchildren, 44 great grandchildren; 7 great-great grandchildren; and a host of nieces, nephews, cousins, and friends.

You can show your support by sending flowers directly to the family by contacting Debbie's Flowers 870.633.2225 Jessie &#8220;June&#8221; Driver was born August 9, 1929 in Grady, Arkansas to Will and Jennie Driver. He was reared in Wynne and... View Obituary & Service Information

The family of Mr. Jessie "June" Driver created this Life Tributes page to make it easy to share your memories.