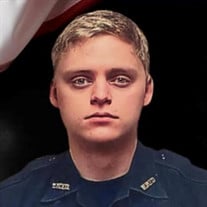 Jason Connor Lang was born August 12, 2001, in Iowa City, Iowa to Joe and Sheryl Lang. He obtained the rank as Eagle Scout from Boy Scout Troop #216 in North Liberty, Iowa in 2019. He graduated from Liberty High School in North Liberty, Iowa in 2020. He attended Kirkwood Community College in Cedar Rapids, Iowa receiving training in automotive technology. Jason enjoyed riding his motorcycle, hanging out with family and friends along with having movie nights. He previously worked for Deery Brothers Chrysler Dodge Jeep Ram of Iowa City as an automotive technician. Before he was hired by the West Memphis Fire Department, he was a volunteer firefighter for the Coralville Volunteer Fire Department in Coralville, IA He had been with the West Memphis Fire Department since December 2021 and was currently in EMT clinical training at the Arkansas Fire Training Academy. Early Saturday morning, February 26, 2022, Firefighter Lang lost his life in the line of duty bravely doing his job and encountering the kind of dangers that Firefighters and EMTs face every day. Jason, without hesitation, bravely made the ultimate sacrifice the day of his demise, and he will always be remembered for his legacy and bravery for serving others. He leaves to cherish his memories his parents—Joe and Sheryl Lang of Coralville, Iowa; brother—Nathaniel Lang also of Coralville, Iowa; his step-brother—Nicholas Lang of Norwalk, Iowa; his grandfather—Joe Lang of Carlisle, Iowa; aunt—Debra Stewart of Allen, Texas; uncles and aunts—Gary and Patti Hoos of Davenport, Iowa and Mac and Gwen McClinton of Graham, Washington; great uncle and aunt—Ted and Connie Lang of Carlisle, Iowa; his girlfriend—Kaitlin Bergan of Mason City, Iowa; and a host of other relatives and friends. He is preceded in death by his grandparents—Frank Bartscher and Betty Bartscher Paustian; grandmother—Marilyn Lang; uncle—Ronald Bartscher; aunt—Brenda Bartscher; and aunt—Doreen Ask.

The family of FF Jason Connor Lang created this Life Tributes page to make it easy to share your memories.