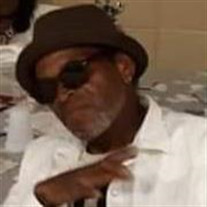 James Edward Mullins was born June 22, 1965 to Ruthie Mae Ivory Anderson and Isiah Mullins, Sr. He departed his earthly life on November 19, 2019. James graduated in 1984 from Forrest City High School in Forrest City, Arkansas. He accepted Christ at an early age at the Union Grove Missionary Baptist Church. He later moved to Plano, Texas with his sister-in-law and extended family (Anthony, Ayanna, and Travenon). While in Plano, he was employed by the Baylor Heart Hospital as a Line Cook for three years. He was also employed by Café Express, a division of the Dallas Cowboys. In 2010 James returned to Forrest City, Arkansas and was employed by Forrest City Grocery of this city. James had a zest for life. He loved all of his family. He had a way of making every one of his nieces and nephews feel special. He enjoyed fishing, and he really loved music. His special interest, though, was making sure his mother’s yard was beautiful, because he loved his mother so. James was preceded in death by his father—Isiah; stepfather—Jack Anderson, Sr.; and two brothers—Calvin and Isiah Jr. He leaves to cherish his memory his mother—Ruthie Mae Anderson of Forrest City, Arkansas; six sisters— Diane (Kenneth) of Forrest City, Ruby Mullins, Ethel Mullins (Cleo), Bertha Mullins of Jonesboro, Arkansas, Pearlie Mullins-White (Albert), and Brenda Ivory of West Memphis, Arkansas; six brothers—Charles Howard, Johnny Mullins Larry Mullins (Christine) of Colt, Arkansas, Jerry Mullins of Little Rock, Arkansas, Roy Ivory, and Earnest Anderson of Stockton, California. James had an extended family including five brothers—Jack, JW, Curtis, James, and Richard Anderson all of Forrest City, Arkansas; three sisters—Alicia, Deborah, and Ruby Anderson also of Forrest City, Arkansas; and a host of nieces, nephews, cousins, and friends.

The family of Mr. James Edward “FAT” Mullins created this Life Tributes page to make it easy to share your memories.