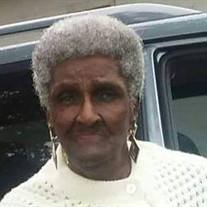 Inez Poole Woodard began her earthly journey on Friday, October 30, 1925 on DeRossitt Farms in Forrest City, AR to Andrew and Cornelia Smith Poole. She was the 4th of 5 children. Inez lived her entire life in either Forrest City, Widener, or Palestine. She attended school in the Summerfield area, but because of failing eyesight she only completed the 8th grade. She was baptized at 12 years of age and was a member of the Summerfield M.B. Church her entire life, which consisted of many different leaderships. She was a devoted President of the Usher Board and Mother of the church. Her health failed her in April 2019, after which she was no longer able to attend in person, but she loved her Summerfield Church and she was always there spiritually. She was married briefly to Garland Flenoy, and they had one child. She later married Ben Woodard and to this union they raised 12 children. Mother Woodard was a woman of small statue but a very big heart. She will be missed not only by her family and friends, but her Summerfield family as well. She was named "the little dancing mother”, because when the Spirit hit her, which was often, she would dance up & down the aisles praising God. Mother Woodard's earthly journey ended and her Heavenly one began on Tuesday, April 21, 2020 at 6:00 a.m. She was preceded in death by her parents, Andrew and Cornella Poole, daughters Ora Mae Poole and Lillian Bradley, sisters: Arena Williams, Leona Bond and Ophelia Gause, brothers: James Henry Poole and Flenzy Poole, grandson Mario Woodard, and great-grandson Caleb Poole. She leaves to cherish her precious memories, 6 sons: Andrew Diggs of Newport News, VA, Daniel (Ella) Poole of Marianna, AR, Benjamin (Bertha) Woodard of Forrest City, AR, Rickey (Rosetta) Woodard of Newport News, VA, Bernard Woodard and Willie Woodard of Forrest City, AR, 4 daughters: Cornelia Flenoy of St. Louis, MO, Bobbie (LC) Brown of Forrest City, AR, Janie Fay Woodard of Forrest City, AR, and Sandra (Dennis) McCoy of Forrest City, AR. She also leaves 40 grandchildren, 60 great grandchildren, and 33 great-great grandchildren, and a host of nieces, nephews, cousins, and friends. A public memorial service will be held at a later date allowing family and friends to gather and share memories of Mrs. Woodard’s life.

Inez Poole Woodard began her earthly journey on Friday, October 30, 1925 on DeRossitt Farms in Forrest City, AR to Andrew and Cornelia Smith Poole. She was the 4th of 5 children. Inez lived her entire life in either Forrest City, Widener,... View Obituary & Service Information

The family of Mrs. Inez Woodard created this Life Tributes page to make it easy to share your memories.