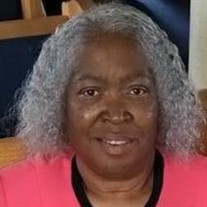 You can show your support by sending flowers directly to the family by contacting Debbie's Flowers 870.633.2225 or by visiting www.etsy.com/shop/ShopYABAS Mrs. Houston Watson Cobb also known as “Sister” due to her warm spirit and nature was born December 02, 1950. She was born to Marie Saines and McKinley Watson SR who both proceeded her in death. Houston confessed a hope in Christ as a child and attended Mt. Sinai MB church with her mother. Houston later meet Lavertis Cobb in May 1974 and on February 28, 1975 they became one in union and also then became a faithful servant of Moore’s Chapel CME church. Every 1st Sunday “Sister” could be seen passing out communion cheerfully until her health failed. Houston attended Lincoln High School, but graduated from Forrest City High School in 1968 as one of the first black students to do so. She always bragged about helping with protest and going to jail in order to help make a change. Houston later began working at Sanyo where she meet her husband Lavertis who she remained married to for 40 years until his passing. After leaving Sanyo she returned to school at East Arkansas Community College where she received an Associate’s Degree in Applied Business. She then took a job at the local Wal-Mart and gained the nick name “Ms. Wal-Mart” and remained there for over 20 years until retirement. Houston spent most Friday nights at the football games cheering for the Mustangs. In 2019 she attended her first NFL game and was so excited because she LOVED to watch football. Houston quietly departed this life on June 7, 2021 while surrounded by loved ones. She was preceded in death by her loving parents, the love her of life of 40 years Lavertis Cobb, and her sister in –laws Ophelia Love, Ottowesse Cobb, and Juanita Cobb Houston leaves to cherish her memories four children; Quala Watson of Forrest City, AR, Estephen Cobb of Jonesboro, AR, Fidel (Alice) Cobb of Colt, AR, Revertis (Lee) Smith of Colt, AR. Two grandchildren that she raised as her very own Philandus Watson of Colt, AR, Assaiyah Cobb of Jonesboro, AR, 10 special grandchildren, and 3 great grandchildren. She also leaves two brothers McKinley (Janice) Watson of Little Rock, AR, Roy (Tanya) Watson of Wynne, AR, and one sister McKenzie Fryer of Armed Forces, One sister in law Retha Gilbert of Forrest City and two loving friends Vera Hurn of Memphis, TN and Shalonda Tubbs of Marion, AR. Also, a host of nieces, nephews, cousins, and friends. Houston always wanted to sing “Amazing Grace” as her testimony during testimonial service and now she will be able to sing in the heavenly choir.

You can show your support by sending flowers directly to the family by contacting Debbie's Flowers 870.633.2225 or by visiting www.etsy.com/shop/ShopYABAS Mrs. Houston Watson Cobb also known as &#8220;Sister&#8221; due to her warm spirit and... View Obituary & Service Information

The family of Mrs. Houston W. Cobb created this Life Tributes page to make it easy to share your memories.