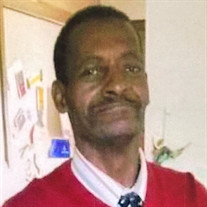 You can show your support by sending flowers directly to the family by contacting Debbie's Flowers 870.633.2225 Mr. Hermon Walker, Sr. was born September 23, 1952 in Marianna, Arkansas to Melvin and Irene Walker. Hermon accepted Christ at an early age at St. John Missionary Baptist Church in Marianna. Later, the family moved to Hughes and joined Friendship Missionary Baptist Church at Simsboro. He attended Mildred Jackson Elementary School, and he completed the 11th grade at Hughes High School The family later moved to Forrest City. He was a former bus driver for the Forrest City School District. He moved to the Chicago and Indiana area, where he worked as an auto mechanic. Hermon was united in holy matrimony to Patricia Moore on December 11, 1974. One child was born to their union. He enjoyed repairing cars and other outdoor activities; but most of all, he loved his children and grandchildren with his whole heart. Hermon Walker, Sr. closed his eyes for the final time and made his transition from this earthly life on January 28, 2021 at his home in Ohio. He was preceded in death by his parents—Melvin and Irene Walker; two brothers—Melvin Walker, Jr. and Reverend Johnny Lee Walker, Sr. Loving memories of Hermon will forever be cherished by his children—DeSera (Clifton) of Harris, Oklahoma, Freddrick Moore of Tennessee, Herman Walker, Jr. and Gloria Flenoy of Arkansas, Osice Lockett of Texas, Brandon Jones of Indiana, and Shytajia Powell of Indiana; six sisters—Catherine Walker of Minnesota, Florine Williams of Forrest City, Helena Rainey of North Carolina, Debra (Frank) Shaw of Forrest City, Betty Akins of Indiana, and Patricia Walker of North Carolina; four brothers—Eddie (Cherylin) Walker of Indiana, Joe Eddie Walker of North Carolina, Reverend Jerry (Willie Mae) Walker of Forrest City, and Micheal Walker of Indiana; twenty-six grandchildren, nineteen great grandchildren, and a host of nieces, nephews, cousins, and friends.

You can show your support by sending flowers directly to the family by contacting Debbie's Flowers 870.633.2225 Mr. Hermon Walker, Sr. was born September 23, 1952 in Marianna, Arkansas to Melvin and Irene Walker. Hermon accepted Christ at... View Obituary & Service Information

The family of Mr. Hermon Walker Sr. created this Life Tributes page to make it easy to share your memories.