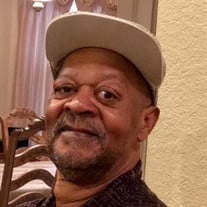 You can show your support by sending flowers directly to the family by contacting Debbie's Flowers 870.633.2225 By and by, we have met up at the call of death; and occasion that is reliably happening around us. We will weep since we will miss him so much, yet we should understand the incomparability of God’s will; and we should acknowledge in confidence and anticipate the restoration of solidarity from Him to continue us in light of the fact that a great life found some conclusion on Thursday, October 15th, 2020 at the St. Francis Medical Hospital in Peoria, IL. Account Opened: Herbert Gates was born in Haynes, Arkansas on May 26th, 1952 to the late Edward Gates and Maxine Adams Gates. He was the sixth child of fourteen siblings. His grandson, Tyler Edward Gates; brothers, Percell and Edward Gates and sisters Betty Gates and Maxine Hayes preceded him in death. Dividends: The Lord blessed Herbert with seven children, his beautiful one and only daughter, Evetta and his handsome sons, Markie Sr, Vinnie, Torrey, Herb Jr., Cornelius, Tyler and one bonus child, Nathan. Long Term Investments: Herbert accepted the Lord at an early age and was baptized into the Christian Faith at Spring Grove MB Church, under the leadership of Rev. CB Bingham. He remained an active and faithful member until he relocated to Peoria, IL where he remained a faithful member until his death at Church of the Living God under the leadership of Bishop Leroy Smith Jr. Herbert attended Anna Strong Elementary, Anna Strong Middle Strong and graduated from Lee Senior High School in 1971. For many years he was employed by Airtherm in Forrest City and Lee County Housing Authority in Marianna, Arkansas until he decided to follow the love of his life in 1990 to Peoria, IL. After dating his love for many years on June 4, 1992, Herbert married Debra Howard Gates. Together they raised two sons (Cornelius and Tyler) and a nephew/son (Nathan). Herbert loved to fish and to work on cars. He could tell you many stories about fishing and just about any problem with a vehicle. Ending Balance: Herbert leaves to continue his account in life: his loving wife, Debra Gates, daughter, Evetta (LaTwon) Whitby of Forrest City, sons, Markie Randle of Dallas, Texas and Vinnie Randle of Forrest City, Torrey Mitchell of Madison, Wisconsin, Herbert Gates Jr. of Little Rock, AR, Cornelius (Alicia) Gates of Peoria, IL , Tyler Gates of Indianapolis, IN and one bonus child, Nathan Howard of Peoria, IL; three brothers, Christopher Gates of Haynes, AR, Ronnie (Alease) Gates of Garland, TX, Tony (Stephanie) Gates of Janesville, WI; seven sisters, Wilma Gates of Whitehall, AR, Connie Cochran of Forrest City, AR, Susie and Vicky Gates both of Haynes, AR; Greta Sanders of Garland, TX and Minnie Ann(Matthew) Gates of Dallas TX; thirteen grandchildren: TaJuan and JaJuan Whitby, Tihja and Amihja Gates, Kendrika Randle, Tyionna, Tayvion, Tyger, Skyla Gates, Markie Jr, Llandon, Jalisha, Mar’Darriyl Randle; Ten Sisters in law: Charlene Gates, Rosie (Monroe) Pointer, Fannie Walters, Jackie (Leon) Funches, Liz (Lyndell) Robinson, Lela Howard, Mira Howard, Marion (Derrick) Hill, Sheila Howard, Paula Howard; Nine Brothers in Law: Moses Hayes, Eddie Howard, Otis (Brenda), Louis (Michelle) Howard, Jerry Howard, Leon (Fairnetta) Howard, Morris (Kathy) Howard, Lee (Patricia) Howard, and Terry Howard.

You can show your support by sending flowers directly to the family by contacting Debbie's Flowers 870.633.2225 By and by, we have met up at the call of death; and occasion that is reliably happening around us. We will weep since we will miss... View Obituary & Service Information

The family of Mr. Herbert Gates created this Life Tributes page to make it easy to share your memories.