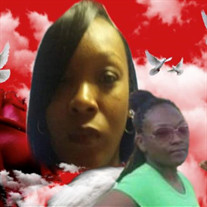 You can show your support by sending flowers directly to the family by contacting Debbie's Flowers 870.633.2225 Felicity Atari Coleman affectionately known as Tee was born on May 28th, 1983 to the late Willie Coleman Sr., and Estella Henderson... View Obituary & Service Information

The family of Ms. Felicity Atari Coleman created this Life Tributes page to make it easy to share your memories.