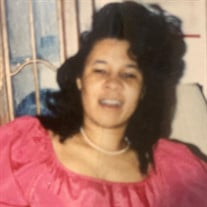 Erma Zell Rucker Wells was born in Hughes, Arkansas on October 5, 1951 the daughter of Willie T. Curtis Rucker and Cliff Rucker, Sr. Erma attended Derossitt School in Widener, AR and graduated from Lincoln High School in Forrest City, AR and was raised in Round Pond, Arkansas and later moved to New York for many years and united in holy matrimony to Leroy Parnell and to this union five children were born. She returned to Arkansas and later met and married Earsell Wells and to this union one child was born. They decided to transition to Detroit, Michigan where they spent over twenty years. During her tenure in Michigan, she attended nursing training, worked in the nursing field then decided to enter the retail world and worked for many years at K-Mart. She accepted Christ at an early age at Pilgrim Rest Missionary Baptist Church in Whitmore, AR and attended church in New York and later joined Pentecostal Temple in Detroit, Michigan. She was affectionately known as “CAT” and “Mama” she was a devoted wife, mother, grandmother, daughter, sister, aunt, cousin, and friend. Erma was preceded in death by her parents, Willie T. Curtis Rucker and Cliff Rucker, Sr.; brothers: Cliff Rucker, Jr., Albert David Earl Lee, and Bruce Rucker; one sister, Pearline Hill. Erma passed away peacefully Saturday, October 23, 2021, after an illness in Little Rock, AR. Her memories will be forever cherished by— her husband: Earsell Wells of Helena- West Helena, Arkansas; her children: Randy Parnell, Leroy Parnell, Erma Jean Parnell, Priscilla (Michael) Clayton, Lee Andrew Parnell, and LaTasha (Charles) Smith and Nicole Clayton whom she raised since birth; 23grandchildren; 5 great grandchildren; brothers and sisters: Tarzan (Diane) Lee, Roy Rucker and Joey Rucker, all of Madison, AR, Columbus (Geraldine) Rucker of Forrest City, AR, Alquincy Rucker of Denver, CO., Clyde (Karen) White of Forrest City, AR, sisters: Willie Jean Redmon of Jonesboro, AR, Lela (Theodis) Goodwin of Madison, AR, Nadine Davis of Nashville, TN, and Maxine (Charles Morgan of Forrest City, AR; and a host of aunts, nephews, nieces, cousins, other relatives, and friends. She was the sweetest person that everybody knew, she was crazy about her grandkids, she loved everybody & never wanted to say anything wrong about anybody, she also had a great sense of humor…. God put our mom on earth to love and that’s exactly what she did. She knew that HER LOVE covered a multitude of sins. There are no words to express how grateful we are to God for choosing her to be our mom. She was a very beautiful soul and was definitely one of a kind.

The family of Mrs. Erma Zell Wells created this Life Tributes page to make it easy to share your memories.