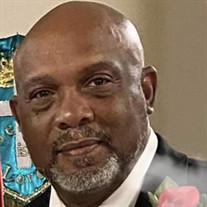 In lieu of flowers, the family gratefully requests that memorial contributions be directed to the St. Francis County Community Foundation in honor of Coach Dwight Lofton, PO Box 3002, Forrest City, AR, 72336 If you desire to send flowers or a memorial gift to the family you can contact Debbie's Flowers 870.633.2225 or by visiting www.etsy.com/shop/ShopYABAS “To everything there is a season and a time to every purpose under the heaven: A time to be born and a time to die.” Ecclesiastes 3:2 Dwight Anthony Lofton, age 60, transitioned from this life early in the morning on Thursday, April 8, 2021. Coach Lofton was born March 23, 1961, in San Antonio, Texas, to Jackson W. and Eddyce M. Lofton. He professed his life to Christ at an early age at Mount Zion Baptist Church in Little Rock. He was a member of Prosperity Missionary Baptist Church in Forrest City. Lofton graduated from North Little Rock Ole Main High School in 1979 and attended the University of Central Arkansas in Conway on a tennis scholarship, where he played singles and doubles matches for three years. While there, he became a member of the Iota Gamma Chapter (Spring ’81) of Kappa Alpha Psi Fraternity, Inc., and graduated from the university in 1984 with a bachelor’s degree in history and health education (double major). “I must work the works of him that sent me, while it is day; the night cometh when no man can work.” John 9:4 Over the 35 years of his teaching career, he taught civics, American history, psychology and sociology. His first head coaching position was Pelican High School in Mansfield, La., where he stayed for two years as head coach of the basketball team. He was an assistant coach at DeSoto High School in Louisiana for one year before returning to the North Little Rock School District as an assistant senior high and head junior high basketball coach for the west campus team for nine seasons. There, he won two district championships with two runners-up finishes. During the summer, Lofton worked with the North Little Rock AAU program. He joined the Forrest City School District as the Mustang senior boys basketball coach in 1996. During the 2006-07 school year, Lofton’s Mustangs finished 26-4 and were Class 6A state runners-up. Lofton sent three players – Stephon Weaver, Kelson Stewart and Marcus Britt (all now inducted into the Forrest City Athletic Hall of Fame) to three different Division I schools following that season. Two of his greatest career accomplishments as a basketball coach were leading the Forrest City Mustangs basketball team to the 2014 and 2016 5A State Boys Basketball Championship games and winning both titles. Lofton was the head tennis and head golf coach in the Forrest City School District which led a student to the title of Overall Girls State Champion of Arkansas in 2018 under the Arkansas State Golf Association. He was selected as the 1995 KARK My Favorite Teacher. In 2012, he was inducted into the Forrest City Athletic Hall of Fame. He was named 5A-East Outstanding Coach in 2014 and 2016, named the 2016 Arkansas Democrat-Gazette Basketball Coach of the Year, and in 2017 received the Buddy Harding (UCA) Alumni Award. He also received numerous other awards over the span of his career. He was preceded in death by his father, Jackson W. Lofton; his paternal grandparents, Adolphus and Theodore Lacy, and his maternal grandparents, Fred and Mary Henderson. He is survived by his supportive and devoted wife, Gwinda Lofton of Forrest City; his loving mother, Eddyce M. Lofton of Sherwood; his sons, Jaylen Lofton of North Little Rock and Avian Wright of Memphis; his daughter, Crenisha Wright of Benton; Paw Paw’s favorite girl/granddaughter, Viani Wright; two brothers, Jeffrey (Shelia) Lofton of Houston, Texas and Michael Lofton of North Little Rock; one sister, Jacqueline Lofton of Sherwood; one nephew, Sean Lebari of Houston, Texas; one niece, Christina Lofton of Mayflower; five aunts, Jewell (Alphonzo) Bowe of Flint, Mich., Dorothy (Robert Sr.) Jones of Sherwood, Faye (George) Long and Patricia Henderson, all of North Little Rock; three uncles, Fred (Juanita) Henderson and Patrick Henderson, all of North Little Rock, and Charles (Jann) Henderson of Frisco, Texas; three brothers-in-laws, Cecil (Mable) Peacock, Henry Peacock and Reginor Peacock, all of Forrest City, and one sister-in-law, Brenda Peacock of Wake Village, Texas; along with many cousins, family, friends, coworkers, and a tremendous host of coaches, students, and his golf, tennis and basketball players. Dwight had a very special bond with several of his players over the years, and you know who you are. A walk-through visitation for Coach Lofton will be held Friday, April 16, 2021, from 4 to 8 p.m., at Mustang Arena. A celebration of Coach Dwight A. Lofton’s life will be held at 11 a.m., Saturday, April 17, 2021, at Mustang Arena, located at 615 Victoria St., in Forrest City, with Evangelist Abbie Robinson delivering the eulogy. Burial will follow at Oakland & Fraternal Historic Cemetery Park, located at 2101 Barber St., in Little Rock. In lieu of flowers, the family gratefully requests that memorial contributions be directed to the St. Francis County Community Foundation in honor of Coach Dwight Lofton, P.O. Box 3002, Forrest City, AR 72336. #RememberingCoachLofton For anyone that would like to forward resolutions or proclamations to be acknowledged at the official funeral service, please send to: [email protected], PO 484, Forrest City, Arkansas, 72336, or fax to 870.633.1920 by Wednesday, April 14, 2021. The family asks that you share your “Coach Lof” stories by posting your videos and pictures (public) on Facebook and using the hashtag #RememberingCoachLofton An official obituary and funeral program to downland: https://qrco.de/lofton

In lieu of flowers, the family gratefully requests that memorial contributions be directed to the St. Francis County Community Foundation in honor of Coach Dwight Lofton, PO Box 3002, Forrest City, AR, 72336 If you desire to send flowers or... View Obituary & Service Information

The family of Coach Dwight A. Lofton created this Life Tributes page to make it easy to share your memories.

In lieu of flowers, the family gratefully requests that memorial...