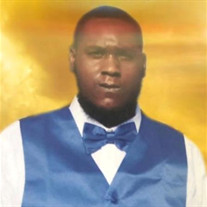 You can show your support by sending flowers directly to the family by contacting Debbie's Flowers (870) 633-2225, or by visiting www.etsy.com/shop/ShopYABAS Douglas “Dougie”, “Lil Doug”) Lamont Logan was a caring, protective, and loving son, brother, grandson, uncle, nephew, and friend. He left this world on May 1, 2022. He was born to Karen White and Scott Logan, Jr. on March 24, 2000. He confessed his life to Christ at an early age at Empowerment of Life Christian Church of God in Christ. After attending Forrest City High School, where he played football, he entered the work field. He was employed with FedEx in 2021 and then worked for Core Mark from 2021-2022. He was a hard, dedicated worker. Aside from work, in his spare time Dougie enjoyed working on cars and watching television. His favorite shows were “Sanford and Son” and “Good Times”. Douglas was preceded in death by his grandparents—Scott, Sr. and Mary Logan, and aunt—Angelina Logan. He leaves to cherish his memory his parents—Karen (Clyde) White and Scott (Sezer) Logan; brothers—Scott Logan, III, Demetrius Williams, Maurice Bradley, II, William Franklin, Jr., Tyrone Logan, Andre Cousins, Arthur Jones and Tyler Walker all of Forrest City, Arkansas ; sisters— Latoya Buchanan and Jasmine Jones both of Forrest City, Arkansas; his grandparents—Vyre (MC) Smith and Kenneth (Parlie) Williams; uncles and aunts— Douglas (Cherry) Buchanan, Derek Lamont (LaTasha) Buchanan, Arizona (Patrice) Logan, Beatrice (Marvin) Banks, Tiffany (Llyod) Lyle, Jamie Williams, Bobbise Logan, and Diane Logan; his best friend who was like a brother to him—Quinn Lockhart; and a host of other relatives and friends who will miss him dearly.

The family of Mr. Douglass L. "Dougie" Logan created this Life Tributes page to make it easy to share your memories.