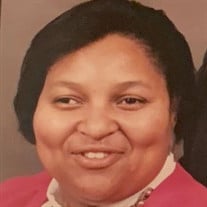 You can show your support by sending flowers directly to the family by contacting Debbie's Flowers 870.633.2225 On Tuesday, October 20, 2020, Donna Marie Dismuke joined her heavenly father and gained her wings. Donna was born to David and Leona Lockridge on July 13, 1956. She attended the Helena-West Helena School District, Central High School Class of 1974. She attended Phillips County Community College where she was very active, serving as a cheerleader and member of the theater arts team. She would go on to receive her Bachelor’s and Master’s Degree from the University of Arkansas at Pine Bluff as well as a second Masters from the University of Arkansas at Fayetteville. She was a dedicated wife and proud mother of 7 children, three biological and 4 adopted children. However, many children called her mom. Donna never saw a baby that she did not want to love. She was a woman who wore many hats, she loved caring for others, attending her Class Reunions, gospel concerts, but most of all she loved God’s Word. Donna confessed her love for Christ at an early age as a member of the Zion Hill Missionary Baptist Church. She later joined Christ Temple Church of God in Christ. She became an Ordained Missionary within the Church of God in Christ. Missionary Donna Dismuke was a faithful servant and powerful prayer warrior. She was an active member of her church, serving as First Lady of the St. Paul Church of God in Christ, Clarendon, Arkansas, and Young People Willing Workers (YPWW) President and later Chairperson for the Helena-West Helena District. She began her professional career as a Youth Care Worker and progressed through the ranks, serving as Juvenile Detention Officer, Juvenile Probation Officer and later becoming the first African American female to be named Director of Juvenile Probation in Eastern Arkansas. She also held positions of Client Coordinator at Mid-South Health Systems and Dispatcher for the Phillips County Sheriff Department. Donna was preceded in death by her father, David Lockridge Sr. and step-son, Tony Dismuke. She leaves to mourn and cherish her memory her husband, Elder McArthur Dismuke; six sons: Phillip Stackhouse (Helena), James Stackhouse (Helena), Houston (LaRhonda) Stackhouse, III (Little Rock), McArthur Dismuke Jr. (Helena), John Dismuke (West Helena), and Nicolas Dismuke (Varner, Arkansas): one daughter; Nikki (Donald) Dismuke (Horn Lake); step-son, Anthony Dismuke; Mother, Leona Lockridge; five siblings: Queen E. Billingsley (Helena), Greathel Bowdery (Chicago), David Lockridge Jr. (St. Louis), Howard Lockridge (Helena), and Carol (Don) Wallace (Helena), as well as a host of grandchildren, great grandchildren, nieces and nephews. Donna Marie Dismuke will be dearly missed by family, her church family and all whom she touched.

You can show your support by sending flowers directly to the family by contacting Debbie's Flowers 870.633.2225 On Tuesday, October 20, 2020, Donna Marie Dismuke joined her heavenly father and gained her wings. Donna was born to David and... View Obituary & Service Information

The family of Missionary Donna Marie Dismuke created this Life Tributes page to make it easy to share your memories.