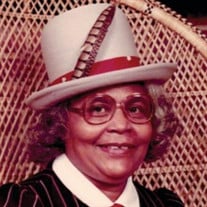 You can show your support by sending flowers directly to the family by contacting ROYAL DESIGN FLOWERS (870) 735-2000 or Debbie's Flowers (870) 633-2225, or by visiting www.etsy.com/shop/ShopYABAS Dollie Mae Bryant, known to old friends as Frog, was the youngest daughter of Chester Alan Arthur Bryant and Mary Alice Melinda Queen Victoria Bryant. She was born December 6, 1925, in Hunter, Arkansas. She joined her heavenly father on May 28, 2022 in the mansion he built with many rooms. Dollie grew up on her daddy's farm in rural Arkansas. She accepted Christ at an early age at Goodwin Temple Church of God In Christ in Goodwin, Arkansas. She later joined Day Temple Church of God In Christ in Forrest City under leadership of Bishop J.H. Jennings. Dollie loved and was loved by her siblings. She was preceded in death by siblings Ottie Mae (Wilbert) Robert, Lottie Mae (Calvin)Hancock and Chester Bryant Jr., Chester Warren, Theodore Warren, Julius Warren and Johnnie Mae Wilson. Dollie loved her children and all her nieces and nephews. She was the family historian. She knew everybody's birthday and all significant events. If anyone needed information, they would check with Aunt Dollie. She made quilts for newborns for pickup when parents stopped by to visit. She always took pictures to capture all special occasions. Prior to retirement from Sanyo Manufacturing 's television plant at age 62 in 1987, she was great at house cleaning but cooking, not so much. Dollie learned to cook very good after retirement. She had offers to pay her to make a pot of spaghetti, meatloaf, peach cobbler, banana pudding. One unnamed nephew (Thea) that she loved wasn't particularly interested in eating her squash. We laugh about it until this day. Dollie, after losing her mom then her dad in the spring of 1976, was inspired to take and pass the Arkansas driver's test. She bought her a car so no more taxis for us. She got good at driving and was able to visit the elderly in the nursing homes, hospitals and worked with food pantry. With no fear, she would hit I-40 and drive over to Memphis or take friends to the hospital in North Mississippi. Dollie wasn't a big sports fan or tv watcher until the late 1970’s and 1980’s night soaps Dallas and Dynasty became must watch tv for her. She later became a big sports fan while I was in college because by watching the games, she got to see her baby boy on tv hollering at screen on front row center court at Razorback basketball games. Once Nolan Richardson arrived, she was his biggest fan and Oliver Miller and Todd Day were her favorites. In February 1992, she ventured to where her father was born. It was a fruitful trip and her constant Bryant genealogy hunting paid off. She discovered that she had an uncle, John L Bryant still living there in Shuqualak, Mississippi. Dollie also loved taking trips to Dallas/Fort Worth to see relatives and friends. She also would visit relatives and friends in Atlanta, New Orleans, St. Louis, Chicago, Milwaukee, Columbus, Pontiac Michigan and San Francisco to name a few. Taking her grandkids to Disney World in Orlando, Florida was a trip she totally enjoyed. My final road trip with her was to Chicago in 2014 to visit her daughter Debra. Dollie will forever be cherished in memories by her children Larry Bryant, Debra Martin, Milton “Don” (Gertrude) Bryant and Anthony “Tony” (Lisa) Bryant. Grandchildren Danyelle (Rendel) Solomon, Milton (Crystal) Bryant II, Ashley Bryant, Justin (Cheryl) Criswell and LScott Bryant. Dollie also loved her 8 great grandchildren including Savannah born this past February. Dollie is also cherished by her host of loving and devoted nieces and nephews from the Robert, Hancock, Bryant and Smith family. Her devoted cousin in Chicago, that she called Theresa, Teresa Richardson faithfully checked on her 10:30 am each Saturday. She is also cherished by a host of other cousins, church members, neighbors and friends (many from Sanyo). A special thanks for her son Larry who devoted his past 5 years being her primary caregiver 24/7 and 365. Job well done!

You can show your support by sending flowers directly to the family by contacting ROYAL DESIGN FLOWERS (870) 735-2000 or Debbie's Flowers (870) 633-2225, or by visiting www.etsy.com/shop/ShopYABAS Dollie Mae Bryant, known to old friends as... View Obituary & Service Information

The family of Ms. Dollie Mae "Frog" Bryant created this Life Tributes page to make it easy to share your memories.