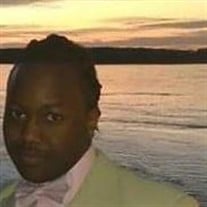 “To everything there is a season, and a time for every purpose under the heaven” Ecclesiastes 3:1 HE ARRIVED Corey D. Anderson was born January 9, 1995 to Lamon Wesley Ollins and Doris Lynetta Anderson in Helena, Arkansas HE LEARNED Corey had a talent of his favorite sport—football. In the 7th grade, Corey began to play football for Barton Bears at Barton, Arkansas, and they were undefeated. Corey graduated from Barton High School in May of 2013. Upon completing his education, he enrolled in college, bur he decided he wanted to work full time. His mother and grandmother instilled in him the importance of faith, integrity, and a strong work ethic, as well as a love for learning and a deep appreciation of life. His teaching helped him find courage and strength through his faith in Christ which led him to accept Christ as his personal Savior. HE BUILT Corey had several jobs in Phillips County, but he found the job he loved at the Arkansas Department of Correction in Brickey, Arkansas. He loved his work as a Correction Officer. He was very dedicated to his job. His work ethic was exemplary. He had great respect for his co-workers and inmates as well. HE LAUGHED Corey was personable, had a great sense of humor, and was genuinely interested in others. He was highly respected for good judgment and sound advise. His upbringing taught him the value of gracious hospitality, which he generously shared with his friends and family. HE REUNITED Corey passed away Saturday, September 21, 2019 in Brickeys Arkansas to be reunited with his father—Lamon Wesley Ollins, Sr.,; brother—Lamon Ollins, Jr.; grandmother— Jeanette Jakes Sidney; his uncle—Jermaine Anderson and a host of aunts and uncles. HE LOVED On March 29, 2018 Corey received his most valuable blessing as a father. NaKorri Anderson became his everything and introduced him to love-at-first-sight. Corey leaves to cherish his memories his loving mother - Doris Lynetta Anderson of Barton, Arkansas; his sons—Na'Kori Anderson and Issac Jackson of Friars Point, Mississippi; two brothers—Patrick Anderson, Cameron Anderson; one sister—Jacquline Ollins Williams (Stacey) all of Little Rock, Arkansas; grandfather—Dennis James Anderson of Chicago, Illinois; step grandfather—Sam Sidney, Jr. of West Helena, Arkansas; three nieces—Camille, Sevyn, and Cameron; one nephew—Stacey, Jr.; and a host of aunts, uncles, other relatives and friends, including his extended family at Arkansas Department of Correction at Brickey, Arkansas.

&#8220;To everything there is a season, and a time for every purpose under the heaven&#8221; Ecclesiastes 3:1 HE ARRIVED Corey D. Anderson was born January 9, 1995 to Lamon Wesley Ollins and Doris Lynetta Anderson in Helena, Arkansas HE... View Obituary & Service Information

The family of Mr. Corey D. Anderson created this Life Tributes page to make it easy to share your memories.

“To everything there is a season, and a time for every purpose...