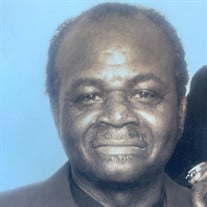 You can show your support by sending flowers directly to the family by contacting Debbie's Flowers (870) 633-2225, or by visiting www.etsy.com/shop/ShopYABAS Pastor Elder Chester Lee Rolfe age 74, of Foreman Arkansas, formerly of Widener/ Madison entered heaven’s gates on Monday, January 10, 2022, at NEA Baptist Hospital, Jonesboro Arkansas. He was born June 15, 1947; he is preceded in death by his parents Elder Moses C. Rolfe Sr and Mary Daisy Rolfe. As well as, two sisters Mattie Hampton and Lois Luise Howard, two brothers Charles Rolfe and Moses C Rolfe Jr. Elder Chester Lee Rolfe accepted Christ at a tender age at Traveler’s Rest Missionary Baptist Church where he was Baptized and filled with the Holy Ghost. He was later ordained as an Elder at Willis Temple C.O.I.G.C; where he served under the leadership of Superintendent James D. Alexander. God later gave him a vision, and he founded and pastored House of Prayer in 1997 where he served until his untimely departure. Pastor Rolfe was very meek, prayerful, and a humble Man of God; who’s hearts postured after God. He enjoyed pastoring where his authentic relationship with God resonated through every church service as well as in daily living. He walked in the Word of God as it alone walked and lived in him. His favorite scriptures, though he had many, came from the book of Psalm 100th chapter and one of his favorite quotes was “ If you can stand the pull, God will pull you out.” He was a loving husband, father, grandfather, great grandfather, brother, uncle, cousin and friend. Elder Rolfe enjoyed talks with his daughters, granddaughters, and his granddaughter in law. He also enjoyed his grandchildren and great grandchildren; as well as hunting, westerns, and kung fu movies. He loved listening to gospel music and watching old VHS (video tapes) of Willie Banks and the Messengers, Willie Neal Johnson and the Gospel Keynotes, Robert Blair and the Fantastic Violinaires, Lee Williams, as well as hearing all of the singers in the St. Francis County Quartet Singing Union as well as several others. Pastor Rolfe never met a stranger, regardless of their last name he loved everyone as family. He leaves to cherish his memories: his loving wife of 51 year, Juanita Rolfe of home, two daughters; Lisa (Anthony) Smith of Jonesboro Arkansas, Vickie Rolfe Ivey of Colt Arkansas, one son Chester Earl (Brittanee) Rolfe of Cabool Missouri. He leaves to cherish four sisters: Missionary Gloria Dean Rolfe and Clara Dale Thomas both of Widener, Odessa Rolfe and Orpha (Clifton) White both of Springfield Illinois; two brothers, Deacon James W. Rolfe of Hughes Arkansas and Elder Tyris Lee (Mary) Rolfe of Proctor Arkansas. Pastor Rolfe also leaves: nineteen (19) grandchildren and twenty-seven (27) great grandchildren as well as a host of nieces, nephews, cousins, several God children and friends.

The family of Pastor Chester Lee Rolfe created this Life Tributes page to make it easy to share your memories.