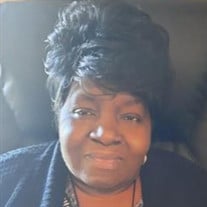 You can show your support by sending flowers directly to the family by contacting Debbie's Flowers 870.633.2225 or by visiting www.etsy.com/shop/ShopYABAS On Monday morning, March 15, Charlotte Marie (Belt) Falls was called home from this earthly realm. Named after her paternal grandmother, "Lotte" was born on April 5, 1956 in Colt, Arkansas. She was the second child born to Future Mae and Joe L. Belt. She accepted Christ in her teenage years at her home church of Jericho Church of God in Christ. She graduated from Forrest City High School in the class of 1974. After high school, she attended the University of Arkansas at Pine Bluff, where she studied education. Lotte married Vernon Falls, Sr. in 1982. This union bore three children  Vernon Junior, Chelsie, and Victor. Though the marriage later ended, Lotte drew on the strength and resolve learned from her widowed mother to become the children's primary caretaker. She was a devoted mother, often working two jobs to support her children. They remember her as soft-spoken  she never yelled or cursed  but no-nonsense. She was a woman of God who ensured her children had a foundation of faith. She attended New Bibleway Family Church for the last few years she lived in Dallas, TX. Lotte worked as a substitute teacher in the Dallas Independent School District for nearly 30 years. Prior to that, she worked at various daycares, head starts, and church school programs. She loved working with young children, and she often enrolled her own children where she worked. Lotte continued teaching until her health declined, at which point, she moved to Colt, AR to live with her big sister, Beverly Bynum. Later joined by one of their younger sisters, Vashti Belt, the three were often humorously compared to the Golden Girls. Lotte's transition to ancestor reunited her with her parents and her brothers, Robert Patrick Belt and Ronald Clint Belt. Among those remaining to honor her memory are her three children; six sisters (Beverly, Velerie Key, Vashti, Judy Ibezim, Pamela Taylor, and Francelia Hamilton); her other five brothers (Joe Belt, Jr., Emmanuel Belt, Carl Belt, George Belt, and Keith Belt); aunts, and numerous nieces, nephews, and cousins.

You can show your support by sending flowers directly to the family by contacting Debbie's Flowers 870.633.2225 or by visiting www.etsy.com/shop/ShopYABAS On Monday morning, March 15, Charlotte Marie (Belt) Falls was called home from this earthly... View Obituary & Service Information

The family of Mrs. Charlotte Marie Belt Falls created this Life Tributes page to make it easy to share your memories.