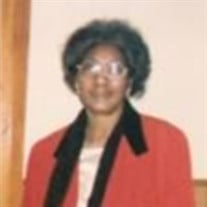 You can show your support by sending flowers directly to the family by contacting Debbie's Flowers (870) 633-2225, or by visiting www.etsy.com/shop/ShopYABAS Catherine Flintroyal-Morgan was born May 9, 1936 to the late Arcolon Flintroyal and Willie Mae Roberts Flintroyal of Valdosta, GA. Catherine met and married the love of her life Robert “Bob” Morgan while he was stationed at Moody Air Force Base, serving in the United States Air Force. Catherine and Bob were blessed with 5 children. Catherine always said, “She felt like she served in the military for 26 years taking care of her children and husband traveling around the world.” They lived in Valdosta GA, Hawaii, France, Spokane Washington, Ohio, Japan, and Texas. As they traveled Catherine worked as a Nurse’s Assistant. After her husband retired from the Air Force, they settled down in Forrest City, AR and Catherine obtained her degree as an LPN at East Arkansas Community College (EACC). She worked as an LPN/Nurse in the Emergency Room at the Forrest City Baptist Hospital and retired from the Crest Park Nursing Home. She was passionate and loved taking care of her patients. Catherine professed a hope in Christ at an early age and joined St. Mary Baptist Church in Naylor, GA. In 1972, she joined the Rising Sun Missionary Baptist Church, where she served faithfully as a Sunday School Teacher, Choir Member, Deaconess, served on the Kitchen Committee, and a member of the Mission Board until her health begin to decline. Catherine departed this life on May 9, 2022. She was preceded in death by her Parents, Husband-Robert Morgan, one sister Diane Brantley-Hart, two Brothers, Alvin Alexander Flintroyal and Tom Flintroyal. She leaves to cherish one sister, Endia Baker, one Aunt, Dollie Brown, and one Brother-Willie C Flintroyal all of Naylor, GA. Five children; three daughters, Roberta (Robert) King-Fort Worth Texas, Beverly J. Morgan-Bartlett, TN, and Cathy (Luke) Hall of Forestville, MD. Two sons, Robert (Lillie) Morgan Memphis, TN, and Bruce (Linda) Morgan of Forrest City, AR. A host of nieces, nephews, cousins, grand-children, and great grandchildren whom she loved dearly.

You can show your support by sending flowers directly to the family by contacting Debbie's Flowers (870) 633-2225, or by visiting www.etsy.com/shop/ShopYABAS Catherine Flintroyal-Morgan was born May 9, 1936 to the late Arcolon Flintroyal and... View Obituary & Service Information

The family of Mrs. Catherine Flintroyal- Morgan created this Life Tributes page to make it easy to share your memories.