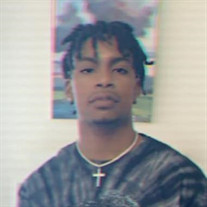 You can show your support by sending flowers directly to the family by contacting Debbie's Flowers 870.633.2225 Carl Juwan Miller affectionately known to many as “CJ” was born to Melinda Barnes and Carl Miller on a Wednesday, December 18, 1996 at 6:25 AM. He was the third child born to Melinda Barnes and the first child of Carl Miller. CJ gave his life to Christ on September 16, 2012 at Spring Grove Missionary Baptist Church under the leadership of Pastor Cedric Colman. CJ attended the Palestine - Wheatley School District up to the fourth grade. He later transferred to the Earle Public School District from the fourth grade through the twelfth grade and was apart of the Class of 2016. During his tenure in the Earle Public Schools, CJ played football, basketball, and ran track for the Earle High School Bulldogs. CJ accomplished All State in track his junior and senior year; running the 100/200 meter and never lost either one at a home meet. CJ also played AAU Basketball. CJ furthered his education at The University of Arkansas at Monticello (UAM) in Monticello, AR for one year. CJ was employed by Ross Ford Toyota in Wynne, AR. He moved to Las Vages, NV, where he was employed at a local dealership. CJ decided to move back Texarkana, TX, where he worked for Walmart until his demise. CJ never met a stranger! He enjoyed making people laugh and he loved his family no matter what. CJ loved making videos and hanging out with his cousins. Carl “CJ” was preceded in death by his grandmother Bertha Mae Isom-Barnes-Sykes, his grandfather Eugene Barnes and Charlie Adell. God sent His Angels down to CJ on Sunday, August 16, 2020. The family will forever miss his smile and humbling spirit. CJ leaves a legacy of memories to his loving Mother, MelindaBarnes-Lawson of Texarakana, AR; his father Carl (Tammaula) Miller of Forrest City, AR; two brothers, DeVille (Valerie) Pickett of Las Vegas, NV, RaShun (Myra) Barnes of Longview, TX, one sister, Anyiah Miller; one step-brother, Tevin Scott, and one step sister, Jaleeah Scott; one niece, Kerrigan Barnes; two nephews, DeVille Pickett, Jr. and Kolton Barnes, and a host of uncles, aunts, cousins and friends.

You can show your support by sending flowers directly to the family by contacting Debbie's Flowers 870.633.2225 Carl Juwan Miller affectionately known to many as &#8220;CJ&#8221; was born to Melinda Barnes and Carl Miller on a Wednesday, December... View Obituary & Service Information

The family of Mr. Carl Juwan "CJ" Miller created this Life Tributes page to make it easy to share your memories.