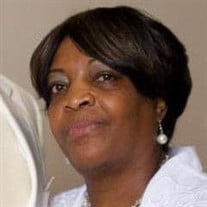 You can show your support by sending flowers directly to the family by contacting Debbie's Flowers 870.633.2225 Brinda Ann McDonald Dean was born on September 7, 1960 to Otis McDonald and Louise Barrett McDonald, which both preceded her in death. She was the second of 8 children, with 2 preceding her in death. She was born and raised in Hughes, AR, where she attended grade school at Mildred Jackson Elementary and she continued her formal education at Hughes High School. After high school, Brinda relocated to Lafayette, LA, where she worked diligently to create a better life for her family. She was married to her former husband, who assisted with raising their four children in Forrest City, AR. Brinda worked overnight to provide care for the elderly. She enjoyed fishing, visiting with her family, vacationing, attending daily prayer service, early morning walking, and street evangelism. Prophetess Dean began her walk of faith at an early age. She was baptized into the body of Christ at the New Bethel C.O.G.I.C in Hughes, Arkansas under the leadership of the late Superintendent Dr. Alexander Dean Jr., where she served as a choir member, assisted with alter call as a prayer warrior, and remained a faithful member until God called her home. Brinda Ann McDonald Dean was a loving and devoted daughter, sister, mother, grandmother and great-grandmother. She leaves to cherish her precious memory of four loving children, Belinda Braddock of Jacksonville, AR, McFerrin McDonald of Augusta, GA, Martisha McDonald of Collierville, TN, and Parnell Dean (Shamieka) of Clarksville, TN; 2 honorary children Roosevelt Dean and Isasha Dean Skinner of West Memphis, AR; 10 grandchildren in which 1 preceded her in death (Jarvis Braddock); 4 great-grandchildren in which 1 preceded her in death (Armani Braddock); 4 sisters Pearly Mae Barrett of Forrest City, AR, Loretha Brooks (Charles) of Marianna, AR, Treva James of Tulsa, OK, and Annie Curne who preceded her in death; 3 brothers, Sylvester McDonald (Carolyn) of Forrest City, AR , Robert Brooks of West Memphis, AR, and Curtis McDonald who preceded her in death; 1 step-brother Brian Johnson of West Memphis, AR and a host of nieces, nephews, aunts, uncles, cousins, and friends.

You can show your support by sending flowers directly to the family by contacting Debbie's Flowers 870.633.2225 Brinda Ann McDonald Dean was born on September 7, 1960 to Otis McDonald and Louise Barrett McDonald, which both preceded her in... View Obituary & Service Information

The family of Prophetess Brinda Dean created this Life Tributes page to make it easy to share your memories.