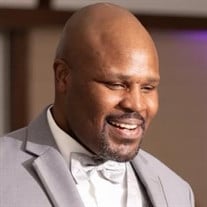 Braxton Williams III was born in Little Rock, Arkansas (Pulaski County) to Doretha Chism and the late Braxton Williams Jr. on January 18,1976 and raised in the Midwest be-fore graduating from Forrest City High School. He was the third oldest out of five siblings including: Cedric (Regina) Williams, Frederick Williams, Sharonda Henderson, and Yolanda (Jerome) Jones. Braxton was an entrepreneur who loved to play and teach sports, barbeque, go fishing, protect his loved ones, play spades, dominos, and Family Feud with family, and supported his children. Braxton was a son, Father, Uncle, Mentor, Coach and a loving cousin to many. During his college years he was able to play football alongside one of his older brothers, Fredrick Williams. They were able to become Conference Champions at Arkan-sas Tech University in 1994. On April 5,1997 he was introduced to fatherhood with Zuela Lopez-Williams as they fathered his first child Braxton Williams IV. He went on to father six more loving children: Buelon “Tre” Williams, Blayton Williams, Brandy Williams, Brodie Williams, Brayden Williams, and Bianca Williams, followed by nine nieces and nephews. Aside from family, he was a mentor to many other younger men through coaching AAU basketball and Pop Warner football and stayed faithful until the end. Braxton devoted his life to being hands on in training his children in multiple sports. He focused mostly on physical conditioning but was very big on instilling mental toughness. Through his efforts he was successful in assisting four of his sons to be offered to play Division I/II college sports. On top of being a family man he was a businessman. In 2003, he started Golden Rule Commercial Cleaning Company to which he still desired to pursue at the end of his journey. Braxton was able to use his optimism and ingenuity to exceed his expectations for his businesses. He departed this life on March 13th, 2022. He was preceded in death by his father – Braxton Williams Jr. and several beloved family members.

Braxton Williams III was born in Little Rock, Arkansas (Pulaski County) to Doretha Chism and the late Braxton Williams Jr. on January 18,1976 and raised in the Midwest be-fore graduating from Forrest City High School. He was the third oldest... View Obituary & Service Information

The family of Mr. Braxton Williams, III created this Life Tributes page to make it easy to share your memories.