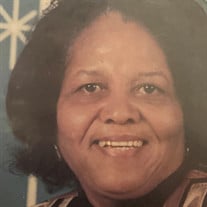 You can show your support by sending flowers directly to the family by contacting Debbie's Flowers (870) 633-2225, ROYAL DESIGN FLOWERS (870) 735-2000, or by visiting www.etsy.com/shop/ShopYABAS Birdie Mae Wilburn was born on July 17, 1935, in St. Francis County, to the late Alberta Nalls and Glen Miller of Mississippi. She professed a hope in Christ at an early age and united with Beth Salem Missionary Baptist Church in Forrest City, AR. Later in life, she joined Breath of Life Christian Center-West in Forrest City, AR. She was a faithful Christian and member of the body of Christ. She was united in holy matrimony to Isaac G. Wilburn Jr. on November 16, 1958. They were blessed to share 48 years together. She was a graduate of the cosmetology school in Memphis, TN where she obtained her cosmetology license. One of her passions and hobby, aside from doing hair was singing. She was a dedicated member of “The Redemption Singers” of Forrest City, AR. She produced an CD titled “Yes, God is Real!” that she dedicated to her late husband and daughter, Isaac G. Wilburn Jr. and Loretta Wilburn-Doyle. She touched the lives and hearts of many with her angelic voice. Mother Wilburn answered her call to our heavenly Father and departed this life on Saturday, April 16, 2022, at 3:26 a.m. She was preceded in death by her father, Glen Miller; mother, Alberta Nalls-Miller-Patton; son, Joseph Wilburn; daughter, Loretta Wilburn-Doyle; husband, Isaac G. Wilburn Jr.; and brother, Gentle G. Miller. She leaves to cherish her memories: 4 sons and 1 daughter, Isaac (Gaynell) Wilburn III of Forrest City, AR, Michael (Cheryl) Wilburn of Little Rock, AR, Benjamin Wilburn of Little Rock, AR, Darrell Wilburn of Forrest City, AR, and Berlinda (John) Jenkins of Forrest City, AR; 11 grandchildren; Loretta, Isaac IV, Chad (Donesha), Salena, Jermaine, Christopher (Reky), Brandon, Benjamin Jr., Khyunna, Braylon, Bryce; 2 great grandchildren close to her heart; Teagan and Carter; 1 special adopted great grandchild, Darius Williams Jr. (Junior); brother-in-law; Ronald Hutchins. She was the mother, grandmother & great grandmother to many children in the church, community or through marriage, and she accepted them all. She also leaves a host of wonderful nieces, nephews, cousins, relatives, and dear friends.

The family of Mother Birdie Mae Wilburn created this Life Tributes page to make it easy to share your memories.