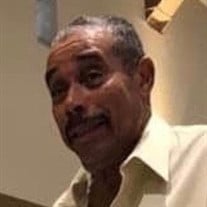 Billy left his family and friends with memories of his charisma, laughter, and love of family and togetherness. Billy was born to Alexander and Jessie Mae (Johnson) Fleming on August 3, 1951 in Madison, Arkansas. He was joined by his twin sister Ima Jean who arrived 3 minutes earlier. From there they have shared an unbreakable bond that has last throughout the years. He spent his adolescents in Madison, AR as a top utility baseball player, with his rebellious nature of walking a fine line when he attended Eldridge Butler Elementary School. Billy accepted Christ at an early age at Macedonia M.B. Church; graduated from Lincoln High School Class of 1969. Although most of his years were in Arkansas he spent some time away. He resided in Chicago, Illinois & Detroit, Michigan where he attended Wayne Community College. For 20+ years he worked for Airtherm Products, Inc. in Forrest City, AR, and later FedEx over in Memphis until retirement. Some of his favorite things were exploring nature, fishing, baseball, the blues, a nice cold beer, sports, dogs, horses, his girls and he had a passion for cooking. His fish fry’s should go down in history. Billy Fleming married Mary Ester (Randle) Fleming his lifelong friend and she brought him the gift of his first daughter, Tamara Paige Varnado. Also, to this union his cherished daughter, Nynechia Alexandra Afriyie was born his "Boopy". Later, his grand-daughter Madison Trinity, his pride and joy would complete this life-long family unit. Preceding him in death are his three deceased brothers, Frankie Lee, Alexander Fleming Jr. (Barbara Jean), and Willie Seamon Fleming (Marilyn) of Milwaukee, Wisconsin and sister Joyce Alexander who have all passed to glory. Billy leaves behind daughters Nynechia (Fleming) Afriyie, Tamara Varnado, grand-daughter Madison Trinity Houston, TX, lifelong friend Mary Fleming Forrest City, Arkansas, brother, Albert Anthony Fleming & (Ronnie) Milwaukee, Wisconsin, Dollie Mae Burton & (Claude) Austin, Texas, Ima Jean Fleming-Foster (Thomas) Austin, Texas, Ardell Fleming Desoto, Texas, Linda Faye Fleming Little Rock, AR. Also, his father's last remaining sister, Lilly Owens - Memphis, Tennessee. Plus, countless nieces, nephews, great nieces, great nephews, and host of cousins, who will forever seek a word or touch from “Uncle Billy”, he will indeed be forever missed. Billy departed this physical world July 18, 2020 and we are left to witness the last curtain call to Billy’s life, as we wish him safe and speedy travels into the arms of his parents and finally into the blessed arms of the Almighty GOD. You can show your support by sending flowers directly to the family by contacting Debbie's Flowers 870.633.2225.

Billy left his family and friends with memories of his charisma, laughter, and love of family and togetherness. Billy was born to Alexander and Jessie Mae (Johnson) Fleming on August 3, 1951 in Madison, Arkansas. He was joined by his twin sister... View Obituary & Service Information

The family of Mr. Billy G. Fleming created this Life Tributes page to make it easy to share your memories.

Billy left his family and friends with memories of his charisma,...