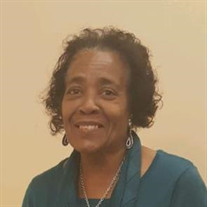 Beverly Ann Joyner-Smith was born on December 4th , 1950, in Forrest City, AR to Mrs. Bertha Lee Hobbs- Anthony and Mr. Dempsey Joyner. She professed her faith in Christ and was baptized at the age of seven (7) in August 1958. While serving as a faithful member of her beloved Madison Light Baptist Church she was a junior usher, vice-president, and president of the Mass Choir. She traveled with her church family until her health would no longer allow her to attend regularly. She is survived by five (5) sisters: Brenda Kaye Watkins of Madison, AR; Joyce Faye Boyd (Curtis) of Madison, AR; Fillis Marie Anthony-Hughes (Earnest) Mesquite, TX; Edna Ruth Anthony of Memphis, TN, and Stephanie Mitchell (Richard) of Forrest City, AR; six nieces, Pamela Denise Joyner-Robinson of Memphis, TN; Coulette Deshun Johnson of Memphis, TN Tabitha Ann Watkins of Madison, AR, Cherry Lee Watkins of Jonesboro, AR, Kaylan Nicole Boyd and Jasmine Brown of Forrest City, AR,and two nephews Andre’ Lamont Anthony Hartsville, TN and Richard Earl Mitchell of Little Rock, AR, and she was preceded in death by her parents, her niece, Angela Marie Clayborn and nephew, Cameron Anthony Williams, and a host of cousins, great nieces, and great nephews, and one God-daughter, Jennifer Gabrielle Joseph of New Orleans, LA. Beverly or as some loved ones called her Aunt Ann or “BJ” loved to sew, shop and sing. She loved vibrant colors and always had a positive spirit about herself. She did not really meet a stranger only someone she might not have talked with yet. Beverly graduated from Lincoln High School in May of 1968 that following fall semester she began her studies on September 14, 1969, at the AM&N known as University of Arkansas at Pine Bluff (UAPB) where she participated in various student activities and organizations. She completed her Bachelor of Arts in Sociology on May 19, 1974. Shortly, thereafter she worked briefly at the former DeRossitt Elementary School. However, Beverly started her tenure of over thirty-seven (37 years) with the Arkansas Department of Human Services- Forrest City, AR location in February 1979 as a social worker and maintained that position until her retirement in December 2016. She was a compassionate and devoted co-worker and social worker to those she served while working at DHS. She loved her job and the idea of helping those in need whether it be professional or personal. She loved people and people loved her if they ever had the honor to be in her presence. She had a very calming peaceful spirit about herself and lit up a room with her smile and the vibrant colors she dressed in always coordinated from head the toe. With the occasional snacks if you needed one.

Beverly Ann Joyner-Smith was born on December 4th , 1950, in Forrest City, AR to Mrs. Bertha Lee Hobbs- Anthony and Mr. Dempsey Joyner. She professed her faith in Christ and was baptized at the age of seven (7) in August 1958. While serving... View Obituary & Service Information

The family of Mrs. Beverly Ann Smith created this Life Tributes page to make it easy to share your memories.